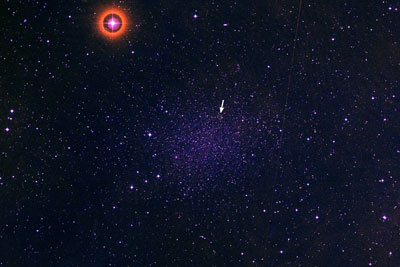 A Cornell-led team of astronomers has observed dust forming around a dying star in a nearby galaxy, giving a glimpse into the early universe and enlivening a debate about the origins of all cosmic dust. 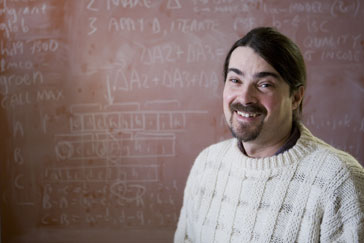 The findings are reported in the Jan. 16 issue of the journal Science (Vol. 323, No. 5912). Cornell research associate Greg Sloan led the study, which was based on observations with NASA's Spitzer Space Telescope. The researchers used Spitzer's Infrared Spectrograph, which was developed at Cornell.

Dust plays a key role in the evolution of such galaxies as our Milky Way. Stars produce dust -- rich with carbon or oxygen -- as they die. But less is known about how and what kind of dust was created in galaxies as they formed soon after the big bang.

Sloan and his colleagues observed dust forming around the carbon star MAG 29, located 280,000 light years away in a smaller nearby galaxy called the Sculptor Dwarf. Stars more massive than the sun end their lives as carbon stars, which in our galaxy are a rich source of dust.

The Sculptor Dwarf contains only 4 percent of the carbon and other heavy elements in our own galaxy, making it similar to primitive galaxies seen at the edge of the universe. Those galaxies emitted the light we now see soon after they and the universe formed.

"What this tells us is that carbon stars could have been pumping dust soon after the first galaxies were born," Sloan said.

Scientists have debated where the dust in the early universe comes from. Supernovae have been a favorite suspect, but they may destroy more dust than they create.

"While everyone is focused on the questions of how much and what kind of dust supernovae make, they may not have appreciated that carbon stars can make at least some of the dust we are seeing," Sloan said. "The more we can understand the quantity and composition of the dust, the better we can understand how stars and galaxies evolve, both in the early universe and right next door."

Observing such stars as MAG 29 is not unlike using a time machine, Sloan said, in which astronomers can catch glimpses of what the universe looked like billions of years ago.

"We haven't seen carbon-rich dust in this primitive of an environment before," Sloan said.

The study is co-authored by J. Bernard Salas, a Cornell postdoctoral associate, and scientists in Japan, England, Australia and Belgium. It is part of a project led by Albert Zijlstra at the University of Manchester in England.