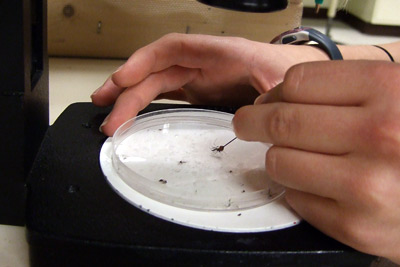 That pesky buzz of a nearby mosquito is the sound of love, scientists have known for some time. But a new Cornell study reports that males and females flap their wings and change their tune to create a harmonic duet just before mating.

Cornell entomologists have discovered that male and female mosquitoes (Aedes aegypti), which can spread such diseases as yellow and dengue fevers, "interact acoustically with each other when the two are within earshot -- a few centimeters of each other," said Ron Hoy, professor of neurobiology and behavior.

The study is available online today (Jan. 8) and will be published in a February issue of Science, said Cornell associate professor of entomology and mosquito expert Laura Harrington, a co-senior author on the study with Hoy.

"The frequency at which males and females converge is a harmonic or multiple of their wing-beat frequencies, which is approximately 400 hertz [vibrations per second] for the female and 600 hertz for the male," said Hoy.

The mating duet, generated just before the couple mates on the fly, settles at around 1,200 hertz -- roughly an octave and a half above concert A (the pitch to which instruments are tuned -- the A that has a frequency of 440 hertz and is above middle C). "That is significantly higher than what was previously thought to be mosquitoes' upper hearing limit," he added.

To study mosquito mating calls, the researchers tethered mosquitoes and flew them past each other while recording the flight tones with a special microphone. Co-first author Benjamin Arthur, a postdoctoral researcher in Hoy's laboratory, placed electrodes in the mosquitoes' auditory organ in their antennae during playback to measure physiological responses of the mosquitoes to the sounds of potential mates.

The researchers hope that their work will provide new ways to better control of mosquito populations in places where yellow and dengue fevers are significant problems.

"By studying these flight tone signals, we may be able to determine what kind of information males and females consider important when choosing a mate," said co-first author Lauren Cator, a Cornell graduate student who works with Harrington. "This will allow us to release 'sexy' transgenic or sterilized males that will be able to successfully compete with wild populations."

Dengue fever affects 50 million people annually, and two-thirds of the world's population is at risk. In recent years, it has reached epidemic levels in Asia, South and Central America and Mexico, where the number of dengue cases has increased by more than 300 percent from year to year. No dengue vaccine is available, and no treatment exists beyond supportive care.

The study was funded by the U.S. Department of Agriculture and by a $19.7 million Foundation for the National Institutes of Health grant awarded to Harrington and a global team of scientists to cure dengue fever and control the mosquitoes that transmit the viruses that cause it.