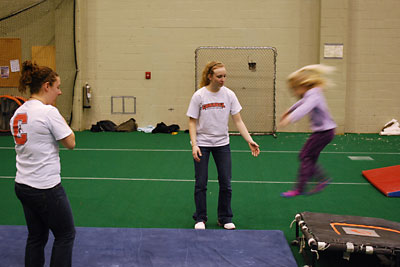 Luke Pryor/Cornell Chronicle
Maddie Pearsall '11, left, and Erin Brosy '10 give pointers to local girls on the gymnastics vault during Cornell's celebration of National Girls and Women in Sports Day, Feb. 21 in Bartels Hall.

National Girls and Women in Sports Day, celebrated on campus Feb. 21, drew dozens of girls in grades one through six to Bartels Hall's Ramin Room, where they received pointers from Cornell women athletes on crew, gymnastics, volleyball, lacrosse, rugby and more.

Many girls stayed on campus to watch the women's basketball team beat Brown, 68 to 58. For the second night in a row, junior Virginia McMunigal set a career high, scoring 24 points in Newman Arena. The Big Red overcame a seven-point deficit late in the second half to even its Ivy League record at 5-5 while improving to 9-13 overall. The game was played as part of the Women's Basketball Coaches Association's Pink Zone initiative to raise awareness and money for breast cancer research.

After the game, an autograph session allowed the girls to meet and speak with the members of the team. Members of the Cancer Resource Center of the Finger Lakes also were on hand to provide educational information and answer questions about breast cancer.

National Girls and Women in Sports Day at Cornell was sponsored by the Cornell Department of Athletics and Physical Education and the Student Athlete Advisory Committee.