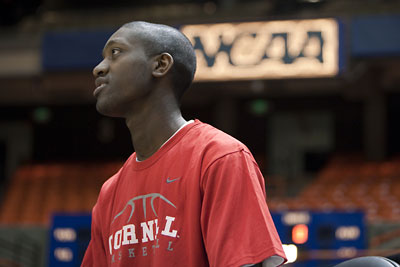 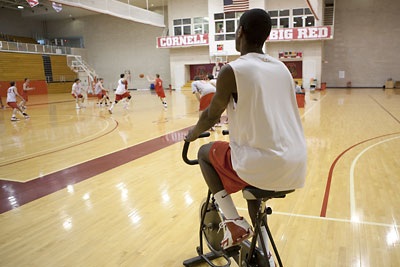 With a barely perceptible limp, Khaliq Gant walked to center court of Newman Arena on basketball's senior night, March 7, to be honored with other graduating teammates.

He wished he could hear the announcer, but the audience had drowned the voice out. Above him a banner read, "KHALIQ HERO FOR ALL TIME."

Gant has not worn a basketball uniform since a career-ending spinal cord injury in January 2006. But he's been part of a team that went from just one winning season in nine years to winning Ivy League championships.

"It's bittersweet," said Gant, a communication major. "Bitter in the fact that obviously I want to be playing, and I feel I could have made an impact playing with these guys. At the same time, I wouldn't be here now if I wasn't injured."

Gant was eligible to graduate this past fall, but he decided to stick around this year for one more basketball season, his fifth. He is now traveling with the team as they face the University of Missouri in the first round of the NCAA tournament in Boise, Idaho.

"It's hard to see him leave our program," said head coach Steve Donahue. "I'm so happy things have turned out the way they did, but if I put myself back in that situation and all that he went through, it's difficult."

Three years ago, then-sophomore Gant dove for a ball during a basketball drill. A collision with teammates dislocated two of Gant's vertebrae, sending him into seven-hour emergency surgery.

"I still remember it in my head like it happened yesterday," said Conor Mullen '09.

Bone from Gant's hip was removed to help fuse his spinal cord, and a titanium plate was inserted to stabilize his neck. When he awoke, he was paralyzed from the neck down, and no one was sure he would walk again.

Gant's injury put a new spin on the team's workouts, Mullen said. They were working to condition their bodies for basketball; Gant "was working to walk again."

"Everything we were doing was easier than what he was doing," Mullen said.

Gant spent nearly six months at a rehabilitation center in his hometown of Atlanta, slowly relearning what most people take for granted -- feeding himself, getting dressed. He spent time in a wheelchair but eventually taught himself how to walk again -- missing only one semester of school.

As he prepares to graduate and start a job at E. and J. Gallo Wines, he can look back not only on a miraculous comeback but also on some amazing on-court events: back-to-back Ivy League championships.

Though permanently sidelined, Gant has never been far from the action. He still has a page in the team's media guide, and he attends every practice and game. Often seen riding an exercise bike or shooting the occasional layup, Gant hopes to play basketball again one day.

Even in the past six months, Gant feels he's gotten stronger. But he's "not as fluid" as he used to be, and his balance is sometimes off. "I have to concentrate to walk around campus," he said. "The hills have been good training."

Assistant coach Zach Spiker is hard pressed to define Gant's role on the team these days, because he's so much to so many. "Everyone is comfortable when Khaliq is around," Spiker said.

Gant admits his injury has probably changed him "in more ways than I can put my finger on."

"Most people who have that kind of injury aren't walking and are in wheelchairs," he said. "I treasure the fact that I can even jump rope or do the athletic things I can do. I know I'm fortunate."

Even during the darkest days, when he couldn't toss and turn at night or scratch an itch on his leg, remaining paralyzed was never an option for him. Asked what his chances were at recovery, Gant just shrugs.

"I knew this was happening, and I was supposed to learn something from it," he said. "The chances were always 100 percent in my mind, and I think that's all that mattered."