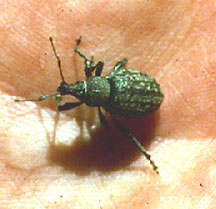 Cornell researchers are spending time in the fields this spring collecting 20,000 alfalfa snout beetles. They need them to test ways to biologically control the pests, which devour alfalfa and other crops.

Two very different beetle controls are under investigation. One is to grow tiny worms called nematodes that naturally attack the beetle. The other is to develop alfalfa varieties that are resistant to the beetle.

So far, tests with the nematodes are proving highly successful, says Shields. "The field results produced on northern New York farms showed the nematodes were able to maintain themselves in the field while reducing the larval populations of the alfalfa snout beetle and reducing or eliminating feeding injury to the alfalfa crops," says Shields, who is developing a cost-effective method for farmers to "grow" and apply their own nematodes to control the beetles. "We think the protocol for using nematodes will require only one inoculation per field with farm-grown persistent nematode strains to reduce the snout beetle population on a farm," he says.

Meanwhile, Viands, who is also associate dean of the College of Agriculture and Life Sciences, has been selectively breeding snout beetle-resistant varieties of alfalfa. After a decade of breeding, some varieties will be entering their sixth and seventh generations of selections this year. The beetles collected by the researchers this spring will be used to stress alfalfa growing in the Cornell plant breeding lab.

Field testing already is under way on several northern New York farms. "We have seen promising trends of less and less root damage on the greenhouse-grown alfalfa and are eager to see how well the experimental plant populations showing the greatest potential for resistance perform on the farms in northern New York," says Viands.

The alfalfa snout beetle is about as long as a human thumbnail with a tough gray shell. The insect is wingless and migrates by walking, often causing large, dark moving masses along rural roadsides. It also spreads by traveling on trucks and farm equipment. The beetle is believed to have first arrived in the United States in the ballast of sailing ships, ultimately arriving in Oswego, N.Y., in the 1800s.