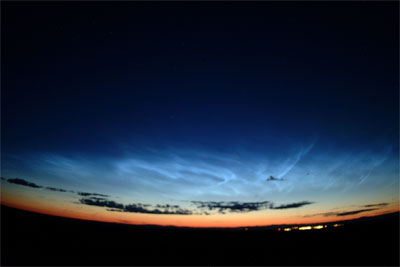 The mysterious 1908 Tunguska explosion that leveled 830 square miles of Siberian forest was almost certainly caused by a comet entering Earth's atmosphere, says new Cornell research. The conclusion is supported by an unlikely source: the exhaust plume from the NASA space shuttle launched a century later.

The research, accepted for publication (June 24) by the journal Geophysical Research Letters, published by the American Geophysical Union, connects the two events by what followed each about a day later: brilliant, night-visible clouds, or noctilucent clouds, that are made up of ice particles and only form at very high altitudes and in extremely cold temperatures.

"It's almost like putting together a 100-year-old murder mystery," said Michael Kelley, the James A. Friend Family Distinguished Professor of Engineering at Cornell, who led the research team. "The evidence is pretty strong that the Earth was hit by a comet in 1908." Previous speculation had ranged from comets to meteors to black holes.

The researchers contend that the massive amount of water vapor spewed into the atmosphere by the comet's icy nucleus was caught up in swirling eddies with tremendous energy by a process called two-dimensional turbulence, which explains why the noctilucent clouds formed a day later many thousands of miles away.

Noctilucent clouds are the Earth's highest clouds, forming naturally in the mesosphere at about 55 miles over the polar regions during the summer months when the mesosphere is around minus 180 degrees Fahrenheit (minus 117 degrees Celsius).

The space shuttle exhaust plume, the researchers say, resembled the water vapor from the comet. A single space shuttle flight injects 300 metric tons of water vapor into the Earth's thermosphere, and the water particles have been found to travel to the Arctic and Antarctic regions, where they form the clouds after settling into the mesosphere. The thermosphere is the layer of the atmosphere above the mesosphere.

Kelley and collaborators saw the noctilucent cloud phenomenon days after the space shuttle Endeavour (STS-118) launched on Aug. 8, 2007. Similar cloud formations had been observed following launches in 1997 and 2003.

Following the 1908 explosion, known as the Tunguska Event, the night skies shone brightly for several days across Europe, particularly Great Britain -- more than 3,000 miles away. Kelley said he became intrigued by the historical eyewitness accounts of the aftermath, and concluded that the bright skies must have been the result of noctilucent clouds. The comet would have started to break up at about the same altitude as the release of the exhaust plume from the space shuttle following launch. In both cases, water vapor was injected into the atmosphere.

The scientists have attempted to answer how this water vapor traveled so far without scattering and diffusing, as conventional physics would predict.

"There is a mean transport of this material for tens of thousands of kilometers in a very short time, and there is no model that predicts that," Kelley said. "It's totally new and unexpected physics."

This "new" physics, the researchers contend, is tied up in counter-rotating eddies with extreme energy. Once the water vapor got caught up in these eddies, the water traveled very quickly -- close to 300 feet per second.

Scientists have long tried to study the wind structure in these upper regions of the atmosphere, which is difficult to do by such traditional means as sounding rockets, balloon launches and satellites, explained Charles Seyler, Cornell professor of electrical engineering and paper co-author.

"Our observations show that current understanding of the mesosphere-lower thermosphere region is quite poor," Seyler said.

The paper is also co-authored by Clemson University physicist Miguel Larsen, Ph.D. '79, a former student of Kelley. The work performed at Cornell was funded by the Atmospheric Science Section of the National Science Foundation.

On July 1, Kelley will give a lecture, "Two-dimensional Turbulence, Space Shuttle Plume Transport in the Thermosphere, and a Possible Relation to the Great Siberian Impact Event," at a plenary session of the annual meeting of Coupling, Energetics and Dynamics of Atmospheric Regions in Santa Fe, N.M.

The paper is available at: http://www.agu.org/journals/gl/papersinpress.shtml.