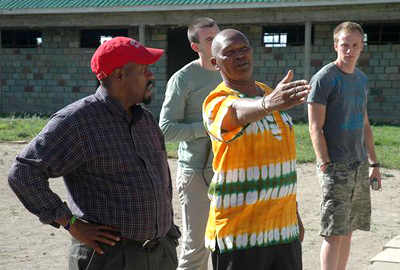 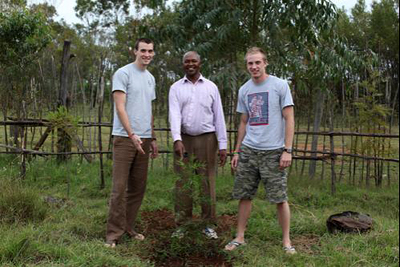 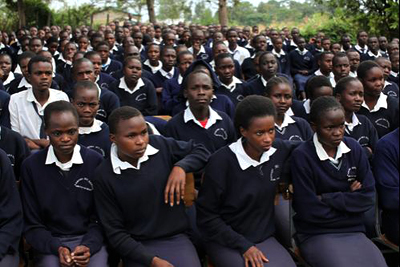 Courtesy of Derek Alvez Images
Students and community members gather in Kamobo, Kenya, for a micro-finance award ceremony at Kamobo High School and to thank the Cross World Africa Inc. visitors for bringing the Let's Get Ready program to their school.

By day, Kevin Thompson, MRP '83, coaches Cornell's track and field team. But by night, he builds bridges to Africa as the founder and executive director of Cross World Africa Inc. (CWA), a nonprofit organization that, in part, helps prepare African youth for education in the United States.

Through CWA, Thompson recently returned with the "Big Red Travel Team" of Cornell coaches and alumni athletes from a 10-day trip (June 17-29) to Eldoret, Kenya, where the Cornellians prepped more than 40 Kenyan students for the SATs, delivered 17 computers for a lab at the new Kip Keino High School and funded a micro-finance program for women. Thompson also met with local organizers to plan a "Kip Keino Mile and Health Fair," where information on HIV/AIDS and birth control will available at a November race in Eldoret.

"[Kipchoge] 'Kip' Keino was a childhood idol of mine," said Thompson of the famed Kenyan long-distance runner. "I remember when I was 10 watching him in 1968 win an Olympic gold medal [in the 1,500-meter run]. Being a young African-American kid, I had never seen a person of color running distance, and you could just see he was an extraordinary person." Keino, dubbed an "athlete who cares," by Sports Illustrated, would go on to open an orphanage, athlete training center and two schools in western Kenya. Thompson would go on to be motivated by him.

"His philosophy of caring about people, and youth in particular, inspired me, and one of my major goals in life has become to help young people in any way that I can," said Thompson.

Thompson mentored young runners through the Ithaca United Track Club for years, founded the Athletes First program at Ithaca High School through the Ithaca Youth Bureau, and works with the Let's Get Ready program in Ithaca, co-founded by Marquise McGraw '06 and Bethany Tong '05, which helps prepare disadvantaged youth for the SATs.

He brought Keino to Cornell in 2006 to launch two initiatives in Kenya that involved Cornellians (the Growing Up in Nairobi program and a collaborative Cornell planning and architecture studio). Thompson then helped bring Keino back six months later for the Kip Keino Weekend to raise funds for Keino's school-building efforts and for the Kip Keino Foundation USA, co-founded by Thompson's wife, Michelle Thompson, a former lecturer in city and regional planning at Cornell. Michelle Thompson, now an assistant professor at the University of New Orleans, was also behind efforts to establish Ithaca as Eldoret's sister city with Ithaca Mayor Carolyn Peterson's backing. Last month in Kenya, as part of the Big Red Travel Team, she consulted with women-owned small businesses to which CWA provided micro-financing and met with the mayor of Eldoret to discuss expanding the Ithaca-Eldoret sister-city relationship.

"CWA is trying to fill in the gaps left after the recent upheaval in Kenya and provide opportunities for youth in East Africa," Thompson said, adding that the Segal Family Foundation was a major sponsor of the CWA Big Red Travel Team.