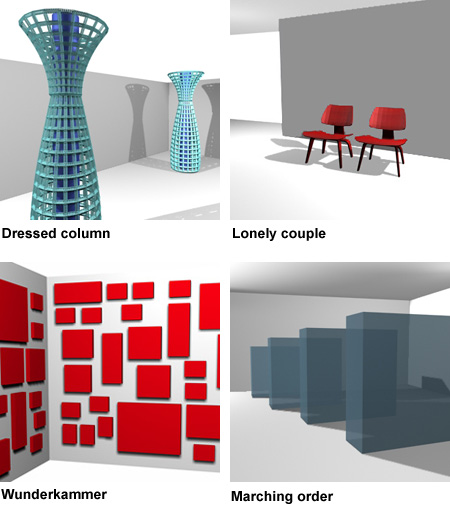 In the 1990s, Professor Jan Jennings struggled to talk with her interior design students about design practices that had been used throughout history and across cultures. There were no names, for example, for a dramatic staircase in the lobby of a luxury hotel or for two similar chairs situated side-by-side in a large space.

For decades -- even centuries, in some cases -- these reiterative examples have gone unnamed and undocumented.

But now, Jennings, a professor of design and environmental analysis, and a cast of Cornell colleagues have produced the first searchable, online database for contemporary design with imagery from real buildings. The work is a collaboration of four faculty members from the Colleges of Human Ecology, Arts and Sciences, and Agriculture and Life Sciences and more than a dozen master's students.

"We had to invent a naming practice, a vocabulary, for students to use in talking about design," Jennings said. "Interior design had borrowed language from architecture and visual arts, but when you came down to it, we didn't have a typology for contemporary design practices that have been occurring across history, style and culture."

The project, called Intypes for the Interior Archetypes Research and Teaching Project, officially launched this summer at the NeoCon Design Trade Show in Chicago with its two founding partners, the International Interior Design Association and Interior Design magazine.

The project, 13 years in the making, so far has named nearly 70 interior archetypes.

"Some of our alumni are using these words in the field," Jennings said. "When they do that, they hear the word being used later by their colleagues. If the word is used without translation or definition, then it really has become a word that contributes to a design language."

Some new names for interior design:

Lonely couple -- Two chairs of the same design that are situated side by side within the space and are isolated from every other furniture configuration.
Dressed column -- Structural or nonstructural columns that are "dressed" by decorative or ornamental means; altogether the columns act as multiple repetitious showcase features.
Marching Order -- A series of repeating vertical display forms organized along a grid that act as consecutive backdrops for display and spatially divide the retail interior.
Wunderkammer -- A historic exhibition aesthetic in which entire walls or ceilings were covered by a multitude of artifacts arranged by taxonomy. Contemporarily, the term refers to assemblages that cover entire interior planes of related or disparate objects.

Sixteen master's students have been actively involved in the project. Many of the students have researched a spatial category or element, such as health care or lighting, for their thesis project, studying the history, cultural implications and use of that type of space, and then suggested names for particular designs they found. Their proposals go to the Intypes Research Group, which evaluates the research and considers the proposed names.

"Some of the things we're naming seem so obvious," Jennings said. "The students do all of this research and come up with a name, and people go, 'Oh yeah, that's what it is.'

"We don't name anything that the entire research group doesn't agree on. And sometimes we start with one name and then change it to another that works better in practice."

Creating this database opens up a whole new field of study, said Jennings. Now that researchers have names for specific interior designs, they can study issues related to them individually, such as their sustainability. If a practice is not environmentally sustainable, Jennings said, the design community should stop using it. Take "the white box" for example: "It's a large, volumetric white room with hot lights. It began being used by museums to showcase artwork. But it creates heating and cooling issues, and it takes a lot of maintenance to keep it looking pristine," Jennings said.

Jennings and her Intypes colleagues hope that their project inspires designers to think about such issues and opens the door to more formal research in interior design.

"Interior design is its own field and profession," Jennings said. "We're hoping the project provides a new way to talk about the field and lends it the credibility it deserves."

Sheri Hall is assistant director of communications at the College of Human Ecology.