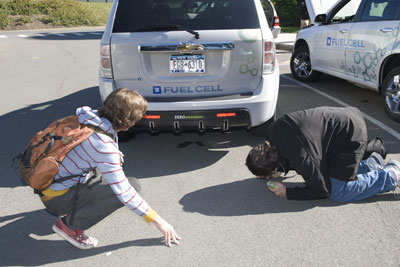 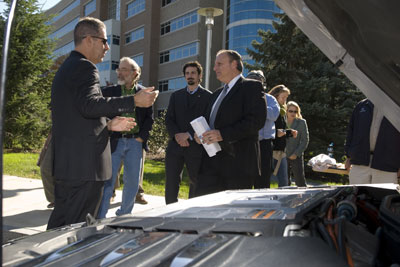 The cars sitting in the loading dock behind Duffield Hall Oct. 19 would seemingly have blended right in on a dealer's lot. But underneath their hoods, the vehicles offered a glimpse into the future of the car industry.

For Cornell's second annual Fuel Cell Ride and Drive, representatives from Toyota, GM and Mercedes-Benz publicly displayed each company's hydrogen fuel-cell car prototype. Onlookers asked questions about the technology, peered inside the cars and took them for test drives.

Among the day's guests was U.S. Rep. Eric Massa (D-Corning), who went for a spin in one of the cars.

"To say that these vehicles are my No. 1 legislative agenda, certainly my No. 2, is not an exaggeration," Massa said.

The purpose of the event, said Paul Mutolo, director of external partnerships for Cornell's Energy Materials Center, was to connect the public with fuel cell technology and, hopefully, help speed the arrival of such cars to the mass market.

Only a few of these cars are now in production, and infrastructure and greater demand are needed to bring prices down and quantities up. The cars require hydrogen filling stations, and only 12 exist in New York state, Mutolo said.

The Toyota Fuel Cell Highlander, according to Toyota spokesman Bob Wimmer, gets about 65 miles per kilogram of hydrogen -- equivalent to about 1 gallon of gasoline. A hybrid Highlander gets about 30 miles to the gallon.

"Our feeling is that within about five years, so around 2015, we'll be getting close to a product that, cost-wise and life-wise, is close enough that we could introduce it as a commercial product," said Wimmer, national manager of technical and regulatory affairs for Toyota Motor North America.

Among those who dropped by the event were Chris Fleischl '11 and Matt Colley '11. Both members of Cornell's Formula SAE Racing Team, the students were admitted car enthusiasts who eagerly flashed their driver's licenses for a chance to test-drive the vehicles.

"Apparently this is going to be what the future of a car is, and we want to see what it will be like," Fleischl said.

The event was hosted by the Cornell Fuel Cell Institute, part of the Cornell Energy Materials Center, and the New York State Office of Science, Technology and Academic Research.