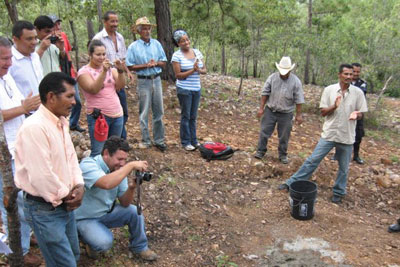 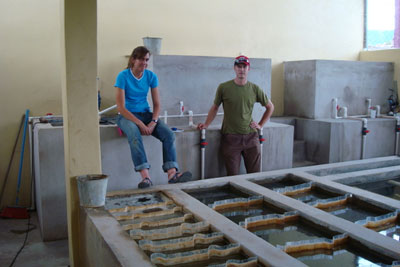 Provided
Julia Schoen '10 and Daniel Smith '06 at the completed water plant in Cuatro Comunidades, Honduras. A Fulbright scholar working in Honduras, Smith is conducting a validation study on AguaClara technology for the regional network of water and sanitation in Central America. Schoen was in Honduras this past summer evaluating the performance of this flocculator and upgrading the chemical dosing system.

AguaClara, a program in civil and environmental engineering in which students design municipal drinking water plants that operate without requiring electricity, celebrated the groundbreaking of its fifth full-scale facility last month.

The new plant, in Agalteca, Honduras, is expected to serve about 2,000 people with clean water by the end of January 2010. Sarah Long '09 was present at the ceremony, which took place Sept. 30. Long is working for AguaClara's partner organization, the Honduran nonprofit Agua Para el Pueblo.

The Agalteca plant is the first facility that was designed by an Agua Para el Pueblo engineer using the AguaClara online design tool, which provides a customized 3-D drawing of the water treatment plant. Design for the flocculator, the reactor that causes impurities to clump together, is the first that was designed based on student research, using the Swanson Engineering Simulation Program.

The first plant designed by the AguaClara team began producing clean water for the Honduran town of Ojojona in 2007. Since then, full-scale municipal plants have been added in Marcala, Tamara and Cuatro Comunidades, now serving more than 13,000 people. Each plant incorporates advances in the technology based on ongoing research by the AguaClara team.