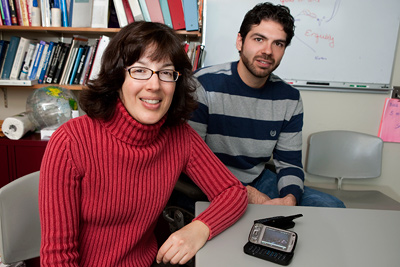 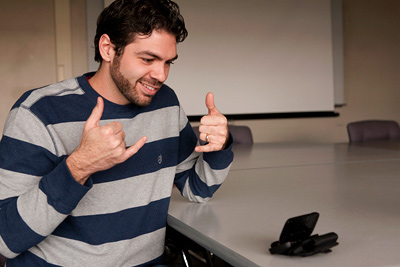 Robert Barker/University Photography
Frank Ciaramello signs into one of the phones.

For those who are deaf or hard of hearing, cell phone use has largely been limited to text messaging. But technology is catching up: Cornell researchers and colleagues have created cell phones that allow deaf people to communicate in sign language -- the same way hearing people use phones to talk.

"We completely take cell phones for granted," said Sheila Hemami, Cornell professor of electrical and computer engineering, who leads the research with Eve Riskin and Richard Ladner of the University of Washington. "Deaf people can text, but if texting were so fabulous, cell phones would never develop. There is a reason that we like to use our cell phones. People prefer to talk."

The technology, Hemami continued, is about much more than convenience. It allows deaf people "untethered communication in their native language" -- exactly the same connectivity available to hearing people, she said.

Since the project, Mobile ASL (American Sign Language), started four years ago, the researchers have published several academic papers on their technology and given talks around the world. The first phone prototypes were created last year and are now in the hands of about 25 deaf people in the Seattle area.

Standard videoconferencing is used widely in academia and industry, for example, in distance-learning courses. But the Mobile ASL team designed their video compression software specifically with ASL users in mind, with the goal of sending clear, understandable video over existing limited bandwidth networks. They also faced such constraints as phones' battery life and their ability to process real-time video at enough frames per second. They solved the battery life problem by writing software smart enough to vary the frames per second based on whether the user is signing or watching the other person sign.

Because ASL requires efficient motion capture, the researchers had to make video compression software that could deliver video at about 10 frames per second. They also had to work within the standard wireless 2G network, which only allows transmission of video at about 15-20 kilobits per second.

This is a relatively small amount of information when compared with a YouTube video, which travels at about 600 kilobits per second. For further comparison, high-definition digital television images come in at 6-10 megabits per second.

Researching how ASL developed gave the team clues on how people use it, said Frank Ciaramello, a graduate student working on the project. They learned that deaf people often use only one hand to sign, depending on the situation, and that they're very good at adapting as needed.

And they found that when two people are talking to each other, they spend almost the entire time focused on the other person's face.

"The facial expressions are really important in ASL, because they add a lot of information," Ciaramello said. They concluded that their cell phone video would have to be clearest in the face and hands, while they could spare some detail in the torso and in the background. Studies with deaf people who rated different videos on an intelligibility scale helped the researchers hone in on the best areas to focus in their video.

The researchers are now perfecting their intelligibility metrics while also looking for ways to bring down the cost of integrating the software into the phones. Making the phones as user friendly as possible is a key goal of the project, Hemami said.

"We don't want people to use the technology and say, 'This is annoying,'" Hemami said. "We want it to be really technology transparent. We want them to call their mother and have a nice conversation."

Mobile ASL is funded by the National Science Foundation.