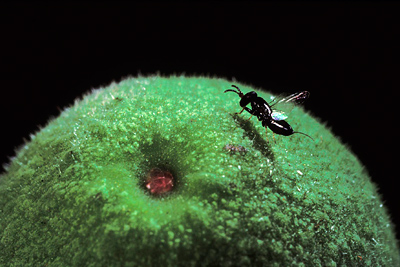 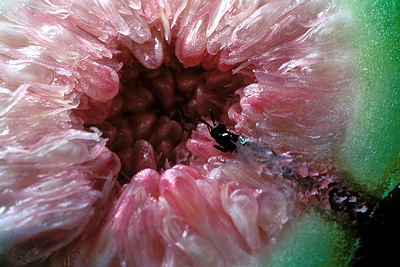 Copyright Christian Ziegler, www.naturphoto.de
Once inside, the fig wasp will pollinate and lay her eggs in the flowers that line the inside of the fig.

Figs and fig wasps have evolved to help each other out: Fig wasps lay their eggs inside the fruit where the wasp larvae can safely develop, and in return, the wasps pollinate the figs.

But what happens when a wasp lays its eggs but fails to pollinate the fig?

The trees get even by dropping those figs to the ground, killing the baby wasps inside, reports a Cornell and Smithsonian Tropical Research Institute study published in the Proceedings of the Royal Society B: Biological Sciences (published online Jan. 13).

The findings suggest that when one species in a mutually beneficial relationship fails to hold up its end of the bargain, sanctions may be a necessary part of maintaining the relationship.

"We want to know what forces maintain this 80 million-year-old mutualism between figs and their wasp pollinators," said lead author Charlotte Jandér, a Cornell graduate student in neurobiology and behavior, who conducted the study as a Smithsonian Tropical Research Institute predoctoral fellow. Edward Allen Herre, a staff scientist at the Smithsonian institute in Panama, co-authored the paper.

"What prevents the wasps from cheating and reaping the benefits of the relationship without paying the costs?" Jandér added.

More than 700 species each of fig trees and wasps have co-evolved in the tropics worldwide, with each fig tree species having its own species of pollinating wasp. Jandér worked on six fig tree-fig wasp pairs for the study. Some wasp species passively carry pollen that sticks to their bodies, while others actively collect pollen in special pouches.

The researchers found that in passively pollinated pairings, the tree almost never aborted its fruit, and the wasp always carried pollen. However, the researchers found that in actively pollinated pairings, where the wasp needs to expend energy to collect pollen, the tree dumped the fruit and killed the offspring when the wasps did not carry pollen.

The researchers also found that among the actively pollinated fig species, pollen-free wasps were much more common when the trees had weak sanctions.

"Sanctions seem to be a necessary force in keeping this and other mutually beneficial relationships on track when being part of a mutualism is costly," said Jandér. "In our study, we saw less cheating when sanctions were stronger. Similar results have been found among human societies and social insects. It is very appealing to think that the same general principles could help maintain cooperation both within and among species."

The study was supported by the Cornell Graduate School and Smithsonian Tropical Research Institute.