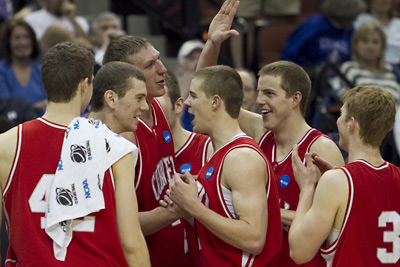 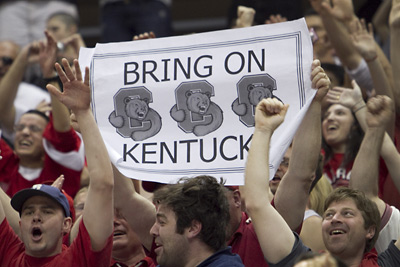 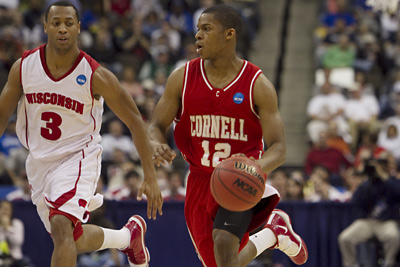 Robert Barker/University Photography
Senior guard Louis Dale takes the ball down the floor in the first half. Dale had a career-high 26 points in the game. 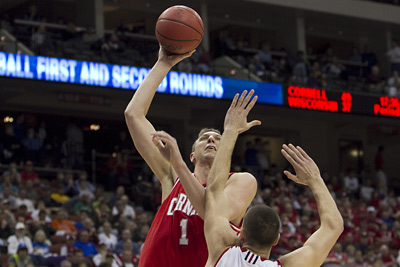 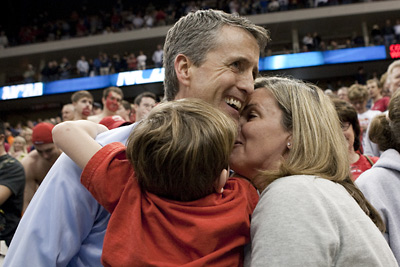 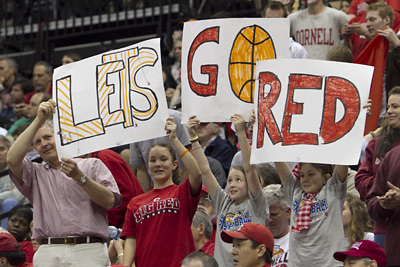 JACKSONVILLE, Fla. -- Victory was sweet, indeed. The Cornell men's basketball team continued its unprecedented run in the NCAA tournament with a resounding 87-69 second-round win March 21 over the fourth-seeded Wisconsin Badgers.

The win sends the 12th-seeded Red into the East Regional semifinals, better known as the "Sweet 16." And though it won't be in Newman Nation where they'll take on No. 1 seed University of Kentucky, it'll be just an hour from home -- the Carrier Dome in Syracuse, March 25. Game time is set for approximately 9:57 p.m.

Players attributed their offensive execution to experience playing together and sharing the ball.

"We have so many unselfish guys on this team," Dale said. "Nobody really cares how it gets done, and we come out to make plays."

Wittman, who was 10 of 15 from the floor, including three of five from three-point range, quickly credited his teammates for helping him.

"I got a lot of good looks," he said. "A lot of credit has to go to our bigs. Jeff Foote is one of the best screeners in the nation."

The victory follows Cornell's first-ever NCAA tournament win, when they beat Temple University March 19 in the first round, 78-65.

Besides their tournament advance, the second-round win meant a host of other records broken. Cornell now has 29 wins -- the most ever for an Ivy League school's single season. Wittman, the Ivy League Player of the Year, surpassed his 2,000th career point early in the game, joining just four others in league history. Cornell is now also the first Ivy League school to make the Sweet 16 since the University of Pennsylvania went to the Final Four in 1979.

Playing in Syracuse is sure to bring out local fans en masse, though it's hard to imagine a more dedicated cheering section than the Big Red's Jacksonville contingent.

With a minute to play, the Cornell section was chanting "Sweet 16." The once-buoyed Wisconsin fans -- also dressed in red -- silently accepted defeat. The point deficit had grown so wide that chatter near the front rows and media table turned to other tournament games several minutes before the buzzer sounded.

Coach Steve Donahue, who climbed into the fan section after the game and hugged Athletics Director Andy Noel, said the game against Wisconsin was as well executed as he could possibly have imagined.

"I have so much respect for Wisconsin and how hard they play and how well they defend," Donahue said. His players, he said, "did a remarkable job staying poised throughout every single possession."

Donahue added that he doesn't think unselfishness is the only key to his players' success.

"The other key is they're talented," he said.

They face a monstrous foe in Kentucky, but Dale said the players are staying focused on their game and what they can do.

"We want to take this ride as long as we can, because after this it's just nothing but babies and memories, so we'll just keep going," he said.