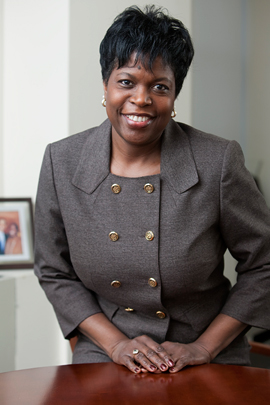 Elmira Mangum, Cornell's new vice president for budget and planning, comes to campus at a challenging time. The university is undergoing a major initiative to "reimagine" itself to strengthen its academic enterprises with reduced resources. She arrives at a time to make a difference.

A seasoned administrator with more than 25 years of experience in executive higher education financial and resource management, Mangum started her new position Feb. 1.

Perhaps her biggest task so far has been preparing Cornell's budget for fiscal year 2011, which begins July 1. "Anybody can cut a budget," she said. "But what we're trying to do is build in a strategy that enables us to continue to provide the quality of education, research and learning community that we always have and do it with the academic and administrative support that we need."

Mangum has extensive experience in dealing with public and private university budgets, both in her most recent post as senior associate provost at the University of North Carolina-Chapel Hill and as vice provost at the State University of New York at Buffalo. "In my view Cornell's financial picture is not as daunting as I've seen or read about in other places," she said. "But there are certainly challenges facing us in the months ahead."

She's also been preparing a capital plan for the next five years and developing an implementation strategy for a new budget model. The implementation team will build on the Budget Model Task Force's proposed outline and concepts of transparency, simplicity, predictability and fairness. "The model provided a framework and raised many key questions that we will work to answer in the coming months," she said.

In the future, she'd like to create an annual process whereby mission units can bring their budget priorities and needs to the central administration for discussion and funding consideration. That process will help to create a more stable, predictable fiscal environment and to align decisions with the strategic plan, she said.

In her new role, Mangum is the senior administrator responsible for managing Cornell's resources and the annual budgeting process, providing leadership in applying university resources to meet Cornell's institutional priorities and academic programming needs. Her duties also include serving as a key liaison with the Cornell Board of Trustees, and along with the president, provost and senior staff, advising the board on the full range of policy, strategy and budgetary matters.

Collaboration is the word she uses to describe her approach, she said. "To succeed, you need an inclusive process that allows the entire university to be able to be part of it and own it."

She calls the Reimagining Cornell initiative the most collaborative process she's seen in her career. "I don't know that I've ever seen as widespread and inclusive planning at an institution as I've seen here," she said. "I think the approach is brave, in the sense that it puts the plan out there and gives everybody a chance to react to it." As for her role in the initiative, she says, "my goal is make sure that [Reimagining] is in the room whenever we talk about resources."

She's optimistic that a positive outcome is achievable, she said. "The beauty of it is to get the community to work together for the good of the institution. What you end up with after the process is over puts everybody in a better position. And I don't think it will take that long if everybody is working together."