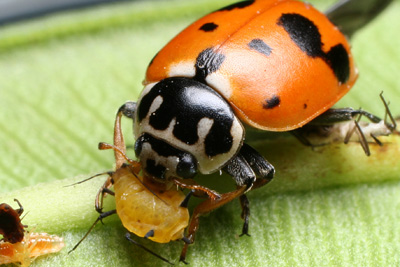 Most studies of food webs look at how predators at the top of the food chain control prey and plant populations below them. But a new Cornell study, published March 26 in Science, is one of the first that shows how plants at the bottom of the food chain have evolved mechanisms that influence ecosystem dynamics as well.

"The ecology and interactions of most organisms is dictated by their evolutionary history," said Anurag Agrawal, associate professor of ecology and evolutionary biology (EEB), the study's senior author.

In food webs, predators help suppress populations of prey by eating them; that frees species lower in the food chain, such as plants, to flourish, a dynamic called a "trophic cascade." Most trophic cascade studies have focused on the ability of predators to increase plant biomass by eating herbivores. Such studies typically find strong trophic cascades in aquatic environments, where big fish eat minnows, which eat the tiny algae-eating crustaceans called daphnia.

Agrawal; first author Kailen Mooney, who is a former Cornell postdoctoral researcher and now assistant professor at the University of California-Irvine; and colleagues studied t rophic cascades in 16 milkweed species, famed for their interactions with monarch butterflies, and also fed upon by aphids.

Plants have evolved three main strategies for increasing their biomass as much as they can against the forces that limit their growth, said the researchers: They grow as quickly as possible; develop direct defenses, such as toxins or prickly leaves, against herbivores; and attract such predators as ladybugs that eat their pests.

But plants do not have the resources to develop all three defenses. Since Darwin, evolutionary biologists have hypothesized that over millions of years of evolution, plant species are subject to trade-offs, developing some defense strategies in lieu of others; a key finding of the new study is that these evolutionary trade-offs drive how modern ecosystems are structured.

In the case of milkweed, some favored fast growth and the ability to attract predators while putting less energy into resisting herbivores.

The study found that one of the major factors leading to greater milkweed biomass (or growth) is the production of volatile compounds called sesquiterpenes, which attract such predators as aphid-eating ladybugs. But surprisingly, the plants' biomass increases regardless of whether ladybugs or other aphid predators are present.

The reason, the researchers suggest, is because the trait to produce sesquiterpenes appears genetically linked to faster growth; the strategy here is to replace leaves faster than they can be eaten. At the same time, milkweed species that put more energy into growing faster put less energy into resisting such pests as aphids.

"Because no species can do everything, milkweeds that grow fast necessarily have lower resistance to aphids," said Agrawal. "Thus species that grow fast benefit the most from predators" of aphids.

The findings have implications for agriculture, as conventional strategies for controlling pests often involve spraying insecticides, said Agrawal. "By including the evolutionary history in our understanding of natural pest management, we gain insight into plant strategies that have stood the test of time, and this may provide hints for breeding crops with traits that ensure robust lines of defense," he added.

Co-authors include Andre Kessler, assistant professor, and postdoctoral researcher Rayko Halitschke, both in EEB at Cornell.

The study was funded by the National Science Foundation, Cornell Center for a Sustainable Future and University of California-Irvine's School of Biological Sciences.