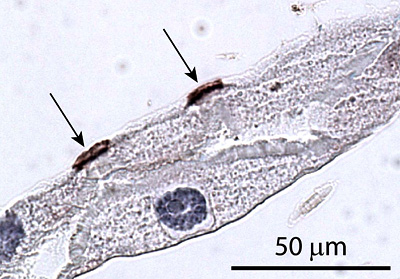 Li Wang/Provided
This image shows a section of a renal tubule from an adult female mosquito (Aedes aegypti). The arrows indicate cells that stain positive for expression of a protein that promotes urination as the mosquitos feed on blood.

Cornell researchers have found a protein that may lead to a new way to control mosquitoes that spread dengue fever, yellow fever and other diseases when they feed on humans: Prevent them from urinating as they feed on blood.

The work may lead to the development of new insecticides to disrupt the mosquito's renal system, which contributes to a mosquito's survival after feeding on blood.

Aedes aegypti mosquitoes transmit the virus that causes dengue fever, putting 40 percent of the world's population at risk of catching the disease, and causing 50 million to 100 million infections (22,000 deaths) annually. They pick up diseases when feeding on infected hosts and can then infect new hosts when they feed again. Currently, no vaccine or treatment protects against dengue, so the only way to stop its spread is by controlling mosquitoes.

But now, a Cornell study published in the March 4 issue of the American Journal of Physiology -- Regulatory, Integrative and Comparative Physiology has identified a protein from the renal tubules of Aedes aegypti mosquitoes that appears to be involved in promoting urination as they feed on blood. When mosquitoes consume and process blood meals, they must urinate to prevent fluid and salt overloads that can kill them.

Also, "they have to undergo rapid urination when feeding, or they can't fly away," said Peter Piermarini, the paper's lead author and a postdoctoral research associate in the lab of Klaus Beyenbach, a professor of biomedical sciences in Cornell's College of Veterinary Medicine and the paper's senior author. "Too much weight will impair the mosquito's flight performance, like an aircraft with too much payload. [If they get too heavy,] they may become more susceptible to being swatted by their host or eaten by a predator," said Piermarini.

The researchers discovered a key protein expressed in the mosquito's renal system that contributes to urination. In lab experiments, Piermarini, Beyenbach and colleagues demonstrated that blocking the protein's function in the renal tubules with a drug reverses the enhanced rates of urination that would occur during blood feeding.

"Thus, blocking the function of this protein in natural populations of mosquitoes may limit their ability to survive the physiological stresses of a blood meal and to further transmit viruses," said Piermarini.

The Aedes aegypti renal system also serves as a valuable model for parts of the mammalian kidney, with similar cells in each system and possibly similar proteins, said the authors.

Co-authors include Laura Grogan, a participant in the Leadership Program for Veterinary Scholars at Cornell in 2007; Kenneth Lau '08, a former research technician in the Department of Biomedical Sciences; and Li Wang '10, an honors student in physiology.