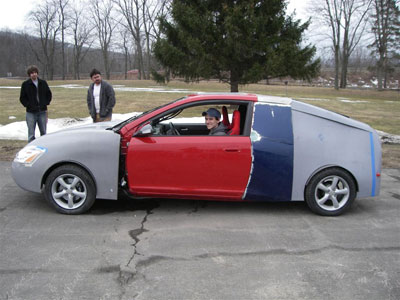 Engines are revving all over the world, as about 40 cutting-edge cars, including one built by the Cornell 100+ MPG team, prepare to go racing.

On March 12, New York state gave Cornell's plug-in hybrid car the green light to hit the road. The team passed its Department of Motor Vehicles salvage vehicles inspection to be eligible for registration in New York -- a requirement to compete and to test in real driving situations. In other words, the car is now roadworthy.

The salvage test is mandatory for handmade cars to ensure that no stolen parts were used in the vehicle. The team is expected to obtain its regular New York DMV automobile inspection in the next several days. 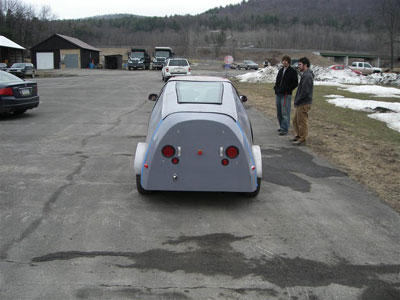 Provided
A rear view of the car.

The 100+ MPG Team is the lone university team competing in the mainstream class of vehicles in the Progressive Automotive X Prize Competition, which starts later this spring. Cornell will face off against about 20 other cars at Michigan International Speedway to vie for a $5 million prize (another $5 million will go to the alternative vehicles class winner). The competition's purpose is to inspire next-generation technologies for fuel efficiency by requiring participants to build cars that get the equivalent of 100 miles to the gallon.

Since the Cornell team learned in October that it had passed technical inspection and was qualified to race, four test drives have been conducted, with more planned. All the major components -- from the electrical drive train and the lithium-ion battery pack to the diesel engine -- have been in place since late January.

Team co-leader David Zlotnick '11 said the team had run into trouble getting the fiberglass body panels to fit the car, which has the chassis of a Subaru and the body of a Honda Civic. For two days last week, instructors and students from Morrisville State College, which has a highly rated auto-body program, hosted the team and helped them fabricate sheet metal panels as well as the vehicle's firewall, and part of the exhaust system.

"They did it in a matter of 16 hours," Zlotnick said. "It would have taken us weeks."

The team's first official X Prize appearance is scheduled for the first week of May at the "Shakedown Stage" -- a sort of dry run, after which teams are allowed to make adjustments to their vehicles. The events include various driving courses around the Michigan International Speedway. The first-round qualifying stage will take place June 20-28. The finals are scheduled for July 19-30; finalists will attend a validation stage at a date to be announced in August.