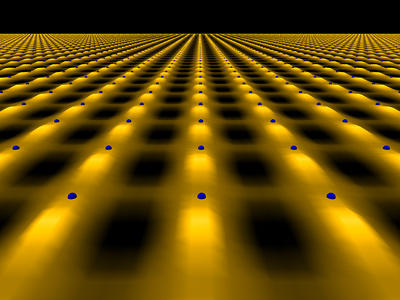 Kazuhiro Fujita/Davis lab
Graphic simulation of the electron cloud in a layer of copper oxide in a cuprate superconductor in the "pseudogap" state. Blue dots mark the position of copper atoms. That the density of electrons around oxygens -- not marked -- is different "north" and "east" of the coppers is a key discovery that may lead to better understanding of high-temperature superconductors.

In a major step toward understanding the mysterious "pseudogap" state in high-temperature cuprate superconductors, a team of Cornell, Binghamton University and Brookhaven National Laboratory scientists have found a "broken symmetry," where electrons act like molecules in a liquid crystal: Electrons between copper and oxygen atoms arrange themselves differently "north-south" than "east-west."

This simple discovery opens a door to new research that could lead to room-temperature superconductors.

"Cornell has the world's best, if not the universe's best scanning tunneling microscope (STM) facility; combining that with a new theoretical idea enabled this discovery," said Eun-Ah Kim, assistant professor of physics at Cornell and corresponding author of a report published July 15 in the journal Nature.

"We know if you identify the broken symmetries, you are close to understanding how a material works," said J.C. Séamus Davis, Cornell's J.D. White Distinguished Professor of Physical Sciences and director of the Center for Emergent Superconductivity at Brookhaven National Laboratory. He said the discovery is analogous to learning that a key to controlling liquid crystals (found in the LCD displays in watches, calculators and computer monitors) was that the molecules can arrange into an asymmetrical state. 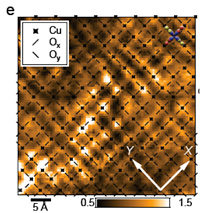 Provided
Actual STM image of the cuprate. Copper-oxygen bonds along the X-direction show a higher intensity than those along the Y-direction. There are several possible reasons for the lack of uniformity in the signal, which the researchers plan to study.

Broken symmetries are seen in many materials when they undergo a "phase transition" like that of water freezing into ice, or liquid crystals becoming opaque. A material going into a superconducting state -- conducting electricity with zero resistance -- is another kind of phase transition.

Superconductivity was first discovered in pure metals cooled very close to absolute zero (-273 degrees Celsius). Ceramic materials called cuprates superconduct at temperatures as "high" as 150 Kelvins (degrees above absolute zero). Cuprates are made up of copper oxide layers alternating with layers of other elements. Each copper oxide layer is a checkerboard sheet formed by repeating an L-shaped unit of one copper and two oxygens, with one oxygen atom to the "north" and the other to the "east" of each copper. The presence of other elements between the copper oxide sheets nudges electrons in the copper oxide sheet around and, at the right combinations of temperature and chemical content, creates a condition for superconductivity.

Davis and his experimental group study these materials using an exceptionally precise STM that can map the location of atoms and energy levels of the electrons around them. In the superconducting phase, an "energy gap" appears -- electrons that ought to be in certain energy levels associated with atoms disappear to form "Cooper pairs" that travel without resistance. But above the superconducting temperature there is a range where the energy gap is still seen, but superconductivity is not.

This "pseudogap" phase may extend all the way to room temperature in some materials, so learning to overcome its limitations could lead to room-temperature superconductors.

The broken symmetry has been present but hidden in existing data from STM experiments including ones from the Davis group, said Kim, who, with colleagues at Cornell and Binghamton, proposed a new theoretical perspective and mathematical procedure to reveal the broken symmetry from the data. Previously, Kim said, theorists had focused only on the arrangement of the copper atoms, and experimentalists had been averaging signals over all the oxygen atoms in a sample, rather than comparing "east-west" and "north-south" signals.

Kim said the finding presents "an opportunity for a whole new stage of research. We have a map of this broken symmetry; now we can experimentally study how it affects superconductivity. Further, the importance of oxygen sites for the broken symmetry points to a theoretical model that may explain the mechanism of pseudogap and high Tc [critical temperature] superconductivity."

The research was supported primarily by the National Science Foundation and Department of Energy. Additional funding was provided by the U.S. Army Research Office and University of British Columbia.