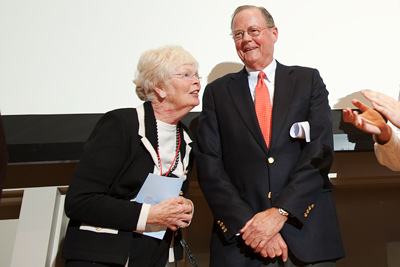 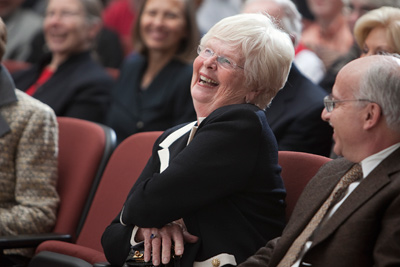 Jason Koski/University Photography
Patricia Atkinson and Glenn Altschuler, the Thomas and Dorothy Litwin Professor of American Studies, share a laugh with the crowd in Statler Auditorium. 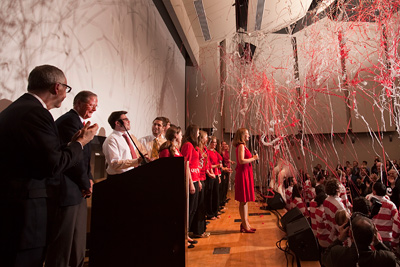 Jason Koski/University Photography
Streamers, singers and the Big Red Marching Band celebrate the single largest gift to the Ithaca campus from an individual.

David R. Atkinson '60 and his wife, Patricia Atkinson, have committed $80 million to provide a permanent center on campus that will advance sustainability research, cultivate innovative collaborations within and beyond Cornell, and position the university to be a global leader in the effort to create a sustainable future. It is the single largest gift to the Ithaca campus from an individual.

"David Atkinson's historic gift provides a permanent Cornell base for stimulating and coordinating the university's unfolding capabilities in sustainability," Skorton said. "It represents a very significant investment in our most valued resource: people -- faculty, staff and students -- with the mission of achieving world impact and leadership in sustainability. Cornell aspires to be a leader in efforts to create a bright future for our world: for our children, grandchildren and generations to follow."

David Atkinson said that new ideas and collaborations are vital in a time of exploding global population and dramatic economic growth. Cornell is a natural leader in the growing field of sustainability research, he said.

"Cornell is the best-positioned university in America, and arguably the world, to develop solutions," Atkinson said; in part due to its place as the most highly ranked American university with a college of agriculture.

"Agriculture has an enormous impact on the environment. In addition, a productive, efficient agricultural sector is a key ingredient for economic development," he said. "Any university addressing sustainability without a college of agriculture is operating at an enormous competitive disadvantage."

Atkinson said he sees ACSF as "a source of unbiased information; a catalyst bringing knowledge from different disciplines together to address sustainability; and a partner with entrepreneurs, businesses, NGOs and governments to magnify the impact of the knowledge and ingenuity at Cornell in moving society toward a more sustainable future."

Atkinson Center for a Sustainable Future

Established in 2007 with major support from David and Patricia Atkinson, the Center for a Sustainable Future currently engages 220 faculty members from 10 colleges and involves 55 departments in interdisciplinary research related to the environment, energy and economic development.

Among its current enterprises:

Researchers are collaborating in efforts to reduce energy consumption and curb emissions, while also seeking ways of capturing and sequestering greenhouse gasses in the atmosphere. Contributors include members of a new multidisciplinary program centered around the computation and modeling of sustainable energy systems; faculty and students in three colleges creating tools for sustainable architectural designs; and researchers at the Energy Materials Center at Cornell working to develop high-performance, durable and affordable materials for advanced fuel cell and battery components.

Cornell is at the forefront of research to develop index-based insurance products for poor herders and farmers and for pre-financing of emergency response by humanitarian organizations. Other Cornell researchers are working on microfinance enterprises in the developing world, the effect of climate change on job growth, the link between agriculture and health and sustainable crop and livestock management.

Center-funded research is contributing to ongoing, larger efforts to develop technology for bio-based energy and feedstock production. Researchers are exploring ways to convert sugars from perennial grasses and woody biomass into fuel and other products. The effort involves dozens of researchers in departments from applied economics and management to engineering and physics.

The center also provides seed funding and promotes grants, employment and conference prospects. Its programs have awarded more than 40 grants totaling more than $4 million since 2008.

Additionally, by linking Cornell research teams to external organizations, the center has so far raised an additional $55 million in support from the federal government, foundations, individual philanthropists, and corporations.

The center will also be a focal point for sustainability-related activity on campus, including education, operations, outreach and research.

"The center provides the means and programs to build new, multidisciplinary collaborations and the external partnerships needed to tackle important and complex problems," said Frank DiSalvo, the center's director and the J.A. Newman Professor of Physical Science. "Chemists are meeting economists, biologists are meeting historians, and so on, and the faculty and staff are transforming Cornell into a living and learning laboratory for sustainability."

DiSalvo said the Atkinson gift will provide a strong, permanent base for future growth and collaboration. "These collaborations will expand Cornell's capabilities by connecting complementary skills and abilities, resulting in significant world impact," he said.

David and Patricia Atkinson are longtime supporters of sustainability at Cornell. In 1991 a gift from the Atkinsons established an endowed professorship, the David R. Atkinson Professor of Ecology and Environmental Biology, held by Robert Howarth.

Atkinson served as a member of the College of Agriculture and Life Sciences Advisory Council from 2003 to 2009, and as co-chair of the Environmental Sustainability and Development Task Force, which helped lay the groundwork for the establishment of CCSF. His support for CCSF has funded more than 40 teams of researchers from across campus since its inception.

He is also a life member of the Cornell University Council. Earlier this year he was elected a presidential councillor, the highest honor the university can bestow.

A graduate of Cornell's College of Agriculture and Life Sciences, Atkinson served in the U.S. Navy for two years before pursuing an MBA at the Wharton School of Business. He has held various posts in the financial industry, including vice president in the research department of Morgan Stanley, co-founder of Franklin Capital Investors and manager of the Scudder Development Fund at Scudder Stevens and Clark.

In 2002 he retired as a general partner of the investment counseling firm Miller, Anderson and Sherrerd LLP and founded Atkinson & Company, an investment management company in Princeton, N.J. He continues to lead that firm.

Patricia Atkinson is a graduate of the University of Southern California. She is active with the Princeton Hospital Auxiliary, for which she has served as membership chair and treasurer, and she was also a longtime volunteer for the Princeton Meals on Wheels Program.

The Atkinsons also support the Atkinson Forum in American Studies, which brings individuals or groups to campus who enrich the curriculum of the American Studies Program and the cultural life of the university.

The son of a New Jersey poultry farmer and agri-businessman whose formal education ended in ninth grade, David Atkinson said he is grateful for the opportunity to strengthen Cornell's leadership role in sustainability through ACSF.

"I think this center will be great for Cornell," Atkinson added, "just as Cornell was, and is, great for me."