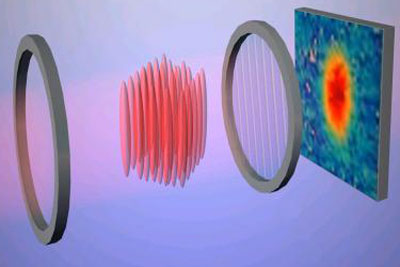 Nature Supplementary Information
Schematic showing an array of tubes containing lithium atoms. The system is probed by imaging the shadow cast by this ensemble.

Dogs and cats, Harry Potter and Voldemort, superconductivity and magnetism -- they tend not to coexist. Superconductivity, the flow of electrons without resistance, is typically suppressed by magnetic fields, which disrupt the intricately choreographed electron motion.

Theoretical physicists at Cornell, working with experimental physicists at Rice University, have carefully engineered a system in which these conflicting properties are believed to put aside their differences.

Publishing online Sept. 30 in the journal Nature, the researchers made and tested an ultra-thin, ultra-cold analogue of a magnetic superconductor -- a sort of one-dimensional wire filled with lithium atoms.

The researchers placed the lithium atoms into bundles of narrow tubes, each of which was only one atom thick. In order to see superconducting properties, they cooled the tubes to about 10 nanokelvin (less than one-hundred-millionth of a degree above absolute zero).

Inside the tubes, the atoms could only bounce off each other in a straight line along the tube. This kinetic restriction stabilizes a "spin density wave" wherein the magnetism is periodically modulated along the tube, on an atomic scale. Superconductivity predominantly builds up in the regions where the magnetism is weakest.

The Cornell theory team, which included assistant professor Erich Mueller and graduate student Stefan Baur, analyzed the experimental data and produced microscopic models of the system. Their principal mathematical technique, the Bethe-Ansatz, was invented by Cornell physicist and Nobel laureate Hans Bethe in the 1930s. Mueller describes the technique as "one of Bethe's greatest legacies."

The work was supported by the Defense Advanced Research Projects Agency's Optical Lattice Emulator program, which seeks to understand and explore the quantum mechanical properties of materials through experiments on atomic clouds.