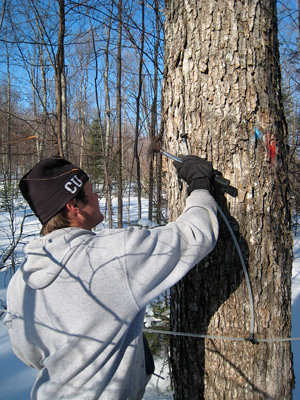 As the climate warms this century, maple syrup production in the Northeast is expected to slightly decline by 2100, and the window for tapping trees will move earlier by about a month, reports a Cornell study.

Currently, the best times to tap maple trees are within an eight-week window from late winter to early spring when temperatures cause freezing at night and thawing by day.

"By 2100, we can expect to begin tapping maples closer to Christmas in the Northeast," said Brian Chabot, professor of ecology and evolutionary biology and a co-author of a paper on climate changes and maple sugar production that appeared earlier this year in the journal Climate Change.

Sap flow is related to pressure changes in the trees' xylem, which are tubes beneath the bark that carry sap from the maple's roots up to the leaves. As maple trees freeze in winter, gases are pushed out of the xylem into surrounding tissues, and negative pressure is created within the xylem compared with atmospheric pressure. When the trees thaw, the gases expand and dissolve back into the sap, creating positive pressure. When tapped, the sap flows out because the pressure inside the xylem is greater than outside.

Based on this principle, Chabot and colleagues identified that the best days for sap flow are when diurnal temperatures swing at least a few degrees below freezing at night to a few degrees above freezing by day.

In the study, lead author Chris Skinner '08, currently a graduate student at Purdue University who studied with co-author Arthur DeGaetano, a Cornell earth and atmospheric scientist, scaled down global climate computer models to regional scales to determine daily temperatures for 10,000 locations across the sugar maple's range -- from North Carolina to Quebec to Minnesota, with optimal production areas in the Northeast and Quebec -- from 1970 to 2100. In this way, the researchers could identify daily minimum and maximum temperatures during optimal eight-week windows for tapping sugar maples.

By "backcasting," the researchers validated their models with temperature data, which revealed that start dates for tapping maples in the Northeast are about a week earlier than in 1970.

Under a high carbon dioxide emissions computer model scenario, syrup production will decline slightly in the Northeast, mostly after 2030. According to the study, by 2100, the average number of flow days will stay constant in Saranac, N.Y.; decline by about two days in State College, Pa.; five days in Montpelier, Vt.; and by 10 days in Jackman, Maine. In a more moderate emissions scenario, producers will lose about half as many days in each location. Similarly, in the high emissions scenario, start dates for tapping maples will be earlier by about a month between now and 2100: In Jackman, the current optimal start date of March 11 shifted to early February; in Saranac and Montpelier, the current start date of March 1 moved ahead to Feb. 1; and in State College and Ithaca, N.Y., start dates advanced to mid-January from mid-February.

Maple production south of Pennsylvania will likely be lost by 2100 due to lack of freezing, while production in Quebec may benefit from climate changes, Chabot added.

The study was funded by the New York State Agricultural Experiment Station and the National Oceanic and Atmospheric Administration.