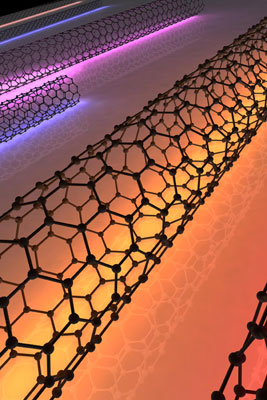 Carbon nanotubes, cylindrical rolled-up sheets of carbon atoms, might one day make ideal optical scattering wires -- tiny, mostly invisible antennae with the ability to control, absorb and emit certain colors of light at the nanoscale, according to research led by Jiwoong Park, Cornell assistant professor of chemistry and chemical biology. The study, which includes co-author Garnet Chan, also in chemistry, is published online Dec. 19 in the journal Nature Nanotechnology. The paper's first author is Daniel Y. Joh, a former student in Park's lab.

The researchers used the Rayleigh scattering of light -- the same phenomenon that creates the blue sky -- from carbon nanotubes grown in the lab. They found that while the propagation of light scattering is mostly classical and macroscopic, the color and intensity of the scattered radiation is determined by intrinsic quantum properties. In other words, the nanotubes' simple carbon-carbon bonded molecular structure determined how they scattered light, independent of their shape, which differs from the properties of today's metallic nanoscale optical structures.

"Even if you chop it down to a small scale, nothing will change, because the scattering is fundamentally molecular," Park explained.

They found that the nanotubes' light transmission behaved as a scaled-down version of radio-frequency antennae found in walkie-talkies, except that they interact with light instead of radio waves. The principles that govern the interactions between light and the carbon nanotube are the same as between the radio antenna and the radio signal, they found.

To perform their experiments, the researchers used a methodology developed in their lab that completely eliminates the problematic background signal, by coating the surface of a substrate with a refractive index-matching medium to make the substrate "disappear" optically, not physically. This technique, which allowed them to see the different light spectra produced by the nanotubes, is detailed in another study published in Nano Letters.

The technique also allows quick, easy characterization of a large number of nanotubes, which could lead to ways of growing more uniform batches of nanotubes.

The paper's principal authors are former student Daniel Y. Joh; graduate student Lihong Herman; and Jesse Kinder, a postdoctoral research associate in Chan's lab. Park is a member of the Kavli Institute at Cornell for Nanoscale Science. Both the Nature Nanotechnology and Nano Letters work were supported by the Air Force Office of Scientific Research and the National Science Foundation through the Center for Nanoscale Systems, Cornell Center for Materials Research, Center for Molecular Interfacing and an NSF CAREER grant.