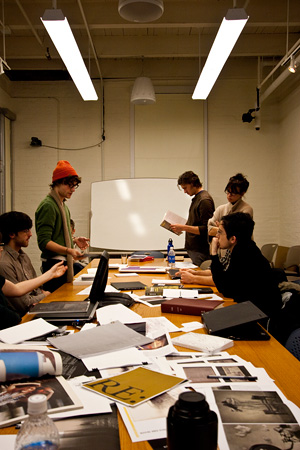 The Cornell Journal of Architecture (CJoA) is relaunching after an eight-year hiatus with Issue No. 8, featuring content by Philip Johnson, Rem Koolhaas, Hod Lipson, Keller Easterling and Peter Eisenman '54, B.Arch. '55, among others.

The student-produced publication will be accompanied by an exhibition Jan. 31-Feb. 4 in John Hartell Gallery in Sibley Hall. The journal will be launched at a gallery reception Feb. 4 at 5 p.m. Digital versions of scarce CJoA back issues will be archived online, starting with the contents of No. 1 in February.

The journal's renaissance began in the summer of 2009 after several architecture students expressed interest in reviving the publication. Faculty member and editor-in-chief Caroline O'Donnell signed on to guide their rethinking of the journal's original concept. Architecture, Art and Planning Dean Kent Kleinman and architecture chair Dagmar Richter also advised the student editorial staff.

"What makes this the Cornell journal as distinct from any other journal?" was among the questions asked, said O'Donnell, a visiting assistant professor of architecture. "The issue of history vs. newness may be more of an issue [here] because Cornell's legacy is so strong. How do we take from the past and transform it?"

A two-semester class was organized, and students looked at other journals in the field and CJoA back issues, talked with professionals and discussed content before soliciting submissions and beginning production.

"In the second semester, we began work as editors, each assigned to a few submissions, working back and forth with contributors, but also collaboratively as a team," said Daniel Marino, B.Arch. '12. "That part of the project was really rewarding, as we often had great debates as the journal itself was taking shape."

"Re" became the theme, since its principal uses -- as a prefix (review, reiterate, re-imagine) and as a preposition meaning "with regard to" -- suggest dialogue, critical review and feedback. Articles in Issue No. 8 begin with a prompt -- usually a direct request or an article for the author to consider.

The new issue is "a look at how important dialogue is in architectural production," O'Donnell said. It features a new interview with Koolhaas, who talks about the influence former Cornell architecture chair O.M. Ungers had on him in the early 1970s; correspondence from the 1950s between Johnson and Sibyl Moholy-Nagy; Kleinman's response to Eisenman's March 2010 architecture vs. design lecture at Cornell, and Eisenman's response to Kleinman. Other Cornell contributors include Michael Ashkin, art; Hod Lipson, engineering; and architecture faculty members John Zissovici, Yehre Suh, Andrea Simitch, David Salomon, Mark Morris and Aleksandr Mergold.

"We wanted to make this something with global relevance," O'Donnell said. "Cornell is far away from everywhere physically, but so much has changed since 1981; now we have new location within the networked world."

The first issue, initiated 30 years ago by then-architecture chair Jerry Wells, was "a snapshot of what was going on at Cornell," O'Donnell said. Issue No. 7, produced in late 2001, focused on permanence; with a terse introduction written by Mark Cruvellier the day after Sept. 11, and a section on AAP facilities, with four early architectural schemes by finalists in a 2000 design competition. (After two accepted and discarded designs, Milstein Hall, designed for AAP by Koolhaas' Office for Metropolitan Architecture, will open this fall.)

The revived journal reflects its own past, and Cornell-centricity in a global context. Also, "drawings and images are considered to be as important as text -- that is something that defines us," O'Donnell said.

"The students are very outspoken -- they weren't shy about putting their ideas on the table and fighting for them," she said. "They really made the effort beyond what would be expected in a regular class, to ensure that this would be the best that it could be."