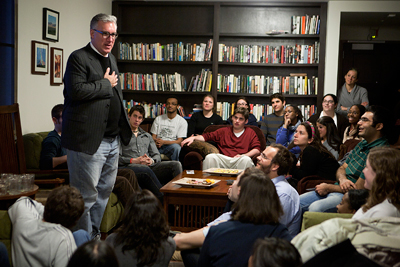 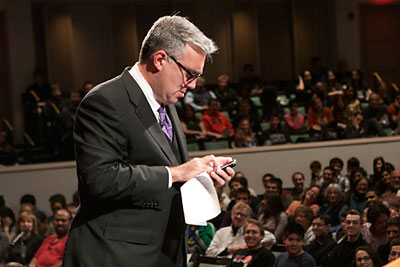 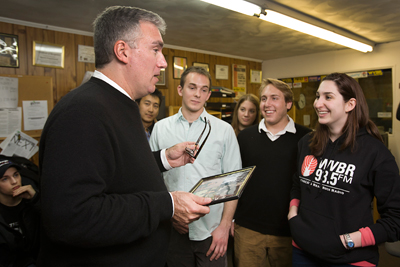 Jason Koski/University Photography
Olbermann checks out old photos of his WVBR days as he tours the station headquarters on Mitchell Street March 28.

Poking fun at Republicans, including Ann Coulter '84, Keith Olbermann '79 entertained a Bailey Hall audience March 29 with stories from his time at Cornell, before his talk took serious turns, addressing such issues as cutbacks in assistance and social programs and threats to labor unions.

Olbermann looked back on his years at Cornell with obvious fondness as he recounted stories from his undergraduate days, including confirming that he was a 16-year-old freshman, was slapped by a girl on his graduation day and broadcasted from a "non-hostage crisis" at Day Hall.

While on campus March 27-30, Olbermann visited several classes, toured WVBR and the Kroch Library, and dined on campus, including at Keeton House, where he spoke to students in the house dean's apartment. The late William Keeton, he said, was the only professor who flunked him.

After mononucleosis took him out of school for the second half of his freshman year, he said he had to take 28 credits his last semester.

"I registered for all these classes, some of which met at the same time," Olbermann said.

He had to clear one final make-up exam at the 11th hour, however.

"The Friday before graduation, I met the T.A. ... for the first time. 'So you're Olbermann,' she said. 'It's like meeting Sasquatch.'"

He was not even sure he was graduating until he called the dean's office in the College of Agriculture and Life Sciences. "I still have nightmares about it," he said.

Since then, Olbermann has become well-known as an anchor on ESPN's "SportsCenter" and more recently as host of "Countdown with Keith Olbermann" on MSNBC. He will host a new prime time show starting in late spring on cable channel Current TV.

The news media have changed a great deal since Olbermann was working at the radio station WVBR, he said in response to a student question.

"Everybody knows by eight o'clock at night what has happened in the world," he said. "I'm successful, not so much because of [my] political point of view, [but for] providing some sort of context to help you understand the news. ... TV is now for background interpretation."

He read an excerpt from House Resolution 1135, the Republican-sponsored Welfare Reform Act of 2011, which, he said, would deny food stamps to families of workers who choose to go on strike.

"If you want to go on strike, whether it's over unsafe working conditions or substandard wages or forced unpaid over time or any of the thousand other injustices, great. Prepare to starve," he said.

Olbermann also advised his audience to learn how much a system demands of you. "Corner cutting is not a bad thing. It's an essential thing. You can't have the time to do everything and give it 100 percent," he said. He also encouraged students to vote, take an interest in all local elections and to run for office, like the school board.

He recalled being turned down for a position at a radio station. The person who wouldn't hire him ended up not doing very well in radio. Sometimes, Olbermann said, "the person who won't hire you is probably not smart enough to."

As for Coulter, who has bashed Olbermann for not attending "the real Cornell," making fun of other people's colleges is part of the Cornell experience, he said.

But recognizing all students who attend this university is "part of a remarkable device in which they're spokes of different natures coming out of a centralized wheel of knowledge ... The people who recognize the diversity and value of this -- that, and we, are the real Cornell."

Elizabeth Simpson '14 is a writer intern at the Cornell Chronicle. Staff writer Daniel Aloi contributed to this report.

Olbermann out and about on campus

Among Keith Olbermann's many stops on campus was the Cornell Social Media Lab, where he learned about student research. He also was a surprise guest lecturer in a New Media and Society class.

During a discussion about how some Cornell professors are experimenting with Twitter as a way for students to help shape class content, Olbermann revealed his fondness for the medium as a tool to engage his audiences, saying it allows them to take ownership over parts of his TV program and share a communal experience.

He shared much of his Ithaca visit with his 261,052 Twitter followers (@KeithOlbermann) by posting several photos of the Cornell campus and memories of his student experiences.