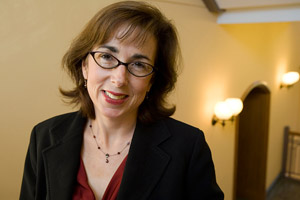 "Keep your government hands off my Medicare," said a citizen attending a town hall meeting in Simpsonville, S.C., in 2009. Many Americans like him -- who benefit from federal largesse but don't realize it -- favor deep cuts to government programs.

The disconnect between what government actually does for individuals and the desire to see Washington brought to its knees is understandable, according to a new study by Suzanne Mettler, Cornell's Clinton Rossiter Professor of American Institutions, published in Perspectives on Politics.

Mettler has coined a new term to describe the vast array of government policies and programs, tax incentives and subsidies that slip from public view: the submerged state (sometimes called hidden welfare programs).

President Obama committed to reform the policies of the submerged state, which is extremely challenging, she said, because citizens are largely unaware of those policies while interest groups are keenly attentive to them and mobilize quickly to defend their turf. "Seeing vested interests at the bargaining table turns citizens off," Mettler said. "Those dynamics have discouraged many of Obama's supporters and helped to provoke the Tea Party."

To learn how much ordinary citizens understand these policies, Mettler designed a nationwide survey of 1,400 Americans, which was conducted by the Cornell Survey Research Institute.

The results reveal a striking gap between perception and reality. Almost half of people who received such submerged state benefits as home mortgage interest deductions, student loans or the earned income tax credit reported that they had not used a government social program.

People are quite aware of the visible government programs -- Social Security, Medicare, food stamps and the G.I. Bill -- but they are "least aware" of such programs as tax-free retirement accounts, the home mortgage interest deduction and government subsidized employer-based health insurance that emanate from the tax system or the public subsidy of private organizations, Mettler said.

How does the vast spending on corporate welfare and aid to the middle and upper classes slip off the average Joe's radar? "There are policies that by virtue of their design are obscured from public view," Mettler said. "All U.S. social policies are on a spectrum from most visible to most submerged."

Social Security, for example, was designed to be financed in part by payroll contributions, making it feel like an earned right, she said.

"It gives many people the impression that it's analogous to private insurance, as if they had their own personal lockbox with their money in it somewhere," Mettler said. "In fact, it is a redistributive social program."

Many submerged state programs redistribute wealth upward, and these programs have expanded while visible programs have atrophied. For example, Mettler said, tax breaks such as the Home Mortgage Interest Deduction have remained strong over the past few decades, but those for working-age Americans have withered.

"These policies of the submerged state have grown in terms of their costs to government, and most of them give the biggest benefits to the wealthiest people," Mettler said.

Mettler sees simple ways for the government to bring submerged programs to the public's attention. These include more talk about the programs by politicians and, following the example of Social Security with its annual itemized report, have the IRS send a note of thanks and an itemized accounting of programs from which taxpayers benefit.

The Russell Sage Foundation and the Spencer Foundation provided funding for Mettler's survey.