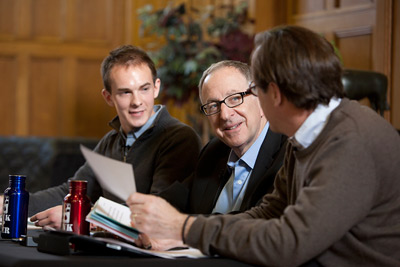 Citing an increased push to expand student financial aid at Cornell during the recent economic downturn, President David Skorton highlighted efforts to increase the affordability and availability of a Cornell education during a town hall discussion organized by WVBR-FM's "Sunday Forum" and broadcast April 10 in the Willard Straight Hall Browsing Library.

"It was very important for me personally to increase the availability of student financial aid when so many families were about to fall off the table," Skorton said. "We went to the board of trustees and asked them if we could take money out of our endowment even when it was shrinking during the downturn in the market. They unanimously supported our taking $175 million out of the endowment over five years to devote an extraordinary amount to student financial aid, [and] we increased it over 25 percent just by that one maneuver."

This action, and the following shift in focus of philanthropy, raised $200 million in donations toward financial aid at a time when the university was also focused on realizing administrative savings, Skorton said.

Future efforts to balance Cornell's budget need not fall on the backs of students, he said, but rather the administration must "try to maintain a chokehold on the amount of money that we spend to run the university.

"[Now] I think the most important thing is that we have funds for students, funds to hire faculty and funds to have the right kinds of facilities to do education and discovery," he said.

The discussion also touched on Cornell's handling of mental health issues. Noting that, nationwide, suicides rank second as a cause of death on college campuses, Skorton detailed university policies toward "means restriction" as a preventative measure, highlighting their efficacy in "separating someone with an impulse from acting on that impulse."

Skorton noted that in the 10 years prior to the suicides, Gannett's mental health services staff more than doubled and that Cornell has earned a national reputation of having a gold standard for a public health approach. He added, "means restriction, a subset of which are the fences on the bridges, is just one piece of a very comprehensive approach."

Finally, in looking forward to Cornell's 150th anniversary in 2015, Skorton detailed his hopes for the future of the university community, financially and otherwise.

In short, Skorton concluded, "I'd love to see the university as relevant as it's always been to life on the planet."

The discussion was hosted by Kyle Scott '11, general manager of WVBR, and Tommy Bruce, Cornell vice president for university communications.