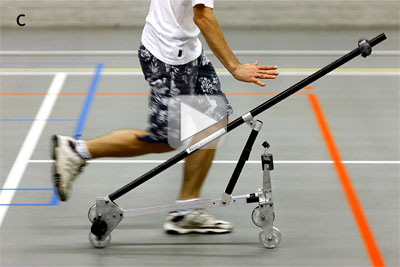 Ruina Lab/Provided
An experimental bicycle designed to eliminate the gyroscopic effect of spinning wheels and the "trail" of the front wheel is still stable on its own, disproving conventional theory.

The 1949 movie "Jour de Fete" shows a postman frantically chasing his bicycle, which rides away on its own. It could happen. Many bicycles, even without a rider, naturally resist tipping over if they are going fast enough.

Scientists and engineers have been trying to explain bicycle self-stability ever since the 19th century. Now, a new analysis says the commonly accepted explanations are at least partly wrong.

The accepted view: Bicycles are stable because of the gyroscopic effect of the spinning front wheel or because the front wheel "trails" behind the steering axis, or both.

If you try to tilt the axis of a gyroscope in one direction, it will turn in a different direction. When a bike leans, the gyroscopic effect tends to steer the handlebars in the direction of the lean, bringing the wheels back under the bicycle and helping to keep it upright.

Meanwhile, if the front wheel touches the ground behind the steering axis, it will be pulled into alignment with the direction of travel, just as a wheel on a shopping cart turns to follow whichever way you push the cart. This "trail" gives the force of the ground on the front wheel a lever arm to cause steering in a way that can help restore balance.

While gyro and trail effects may contribute to self-stability, they are not the only causes, report Andy Ruina, professor of mechanics at Cornell, and colleagues in the Netherlands and at the University of Wisconsin. To prove it, they built a bicycle without any gyro or trail effects that can still balance itself. Their results are published in the April 15 issue of the journal Science.

Using a mathematical analysis that shows how various values for the masses and lengths produce stability or instability, the researchers determined that neither gyro nor trail effects are needed for self-stability. 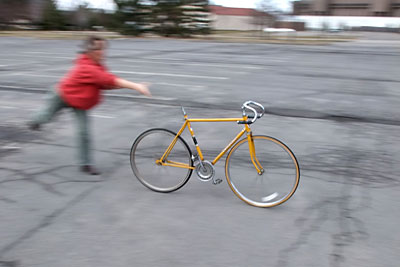 Ruina Lab/Provided
Almost any bicycle will keep itself upright as long as it's rolling. Mathematical analysis shows that long-accepted explanations are incomplete.

They built a bicycle with two small wheels, each matched with a counter-rotating disk to eliminate the gyro effects, and with the steering axis located behind the front wheel's point of contact, giving the machine a slightly negative trail.

When given a good push, the experimental bike still coasts and balances successfully if it is going fast enough (more than about 5 mph). If you knock it to one side while it's moving, it straightens itself back upright. Like a human rider, the riderless bike turns the handlebars in the direction of a fall, even when gyroscopic and trail effects are eliminated.

The cause is that the center of mass of the front steering assembly of the test bike is lower than that of the rear frame and forward of the steering axis, the researchers explained. In a fall the front tends to fall faster, and this causes it to turn in the direction of the fall.

"There are other ways to distribute the mass and get self-stability without gyro or trail," Ruina noted.

While their work was intended to gain insight into the nature of bicycle balance, the researchers said, their analysis could lead to further improvements in bicycle design. "The evolutionary process that has led to common present bicycle designs might not yet have explored potentially useful regions in design space," they concluded.