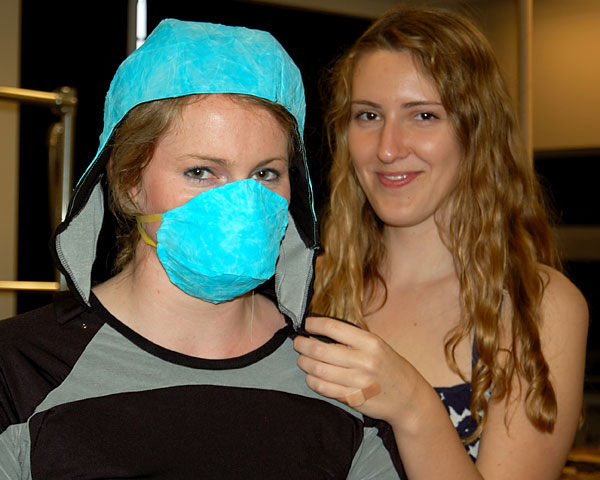 A new Cornell cloth that can selectively trap noxious gases and odors has been fashioned by a senior into a mask and hooded shirts inspired by the military.

MOFs, which are clustered crystalline compounds, can be manipulated at the nanolevel to have cages that are the exact same size as the gas they are trying to capture, said Jennifer Keane '11, a fiber science and apparel design (FSAD) major in the College of Human Ecology.

Keane worked with Hinestroza and fiber science postdoctoral associate Marcia Da Silva Pinto to create the gas-absorbing hood and mask. Some of the basic science behind this project was funded by the U.S. Department of Defense.

"The initial goal of attaching the MOFs to fibers was sponsored by the Defense Threat Reduction Agency. We wanted to harness the power of these molecules to absorb gases and incorporate these MOFs into fibers, which allows us to make very efficient filtration systems," Hinestroza said.

Da Silva Pinto first created MOF fabrics in Hinestroza's lab, working in collaboration with chemists from Professor Omar Yaghi's group at the University of California-Los Angeles; Yaghi is one of the pioneers and leaders of MOF chemistry, said Hinestroza.

At first the process did not work smoothly. "These crystalline molecules are like a powder that cannot easily become part of cloth," Da Silva Pinto noted. After months of trying to attach the particles to the fiber, the researchers realized that, "The key was to bring the fiber to the particle ... It was a real paradigm shift," she said.

"Now we can make large surfaces of fabric coated with MOFs, and we are looking at scaling up this technology to nanofibers," said Hinestroza. "This type of work would only be possible at a place like Cornell where you have this unique merging of disciplines, where a fashion designer can interact easily with a chemist or a materials scientist."

Though trained as a chemical engineer, Hinestroza said he likes "to work with designers because they think very differently than scientists. I love that because that's where the real creativity comes, when you have this collision of styles and thinking processes."

Keane, who took Hinestroza's Textiles, Apparel and Innovation class, said she started Cornell as a pre-med major but switched to FSAD because she enjoyed the creative aspect of sewing and designing her own clothing in high school. She has since interned with Nike and recently received a job offer from Adidas.

She noted that while her MOF hood and mask will not be showcased in the upcoming Cornell Fashion Collective spring fashion show at Barton Hall, April 16, 7-9:30 p.m., her line of comfortable women's sportswear will be. It includes many geometric patterns and bright jewel tones.

"It's a lot of knits, jersey and this brushed denim, which is really soft ... It was based off of jewelry designs that I saw in Italy," she said.