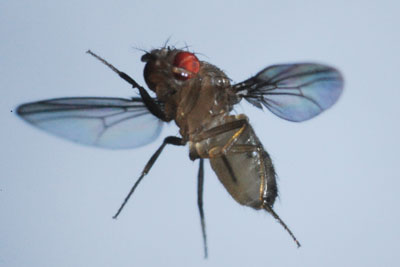 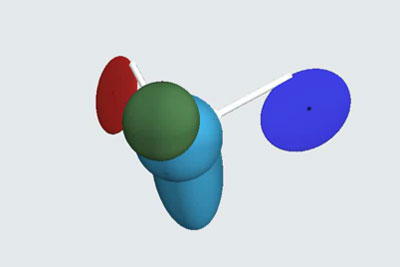 Like a fish paddles its pectoral fins to swim through water, flying insects use the same physics laws to "paddle" through the air, say Cornell physicists.

Using high-speed videography and a precision algorithm for 3-D motion tracking, Cornell researchers have demonstrated that swimmers and flyers share similar force generation methods to propel themselves through water or air. This finding goes against conventional theories that the "paddling" motion common to swimmers, which use drag forces to propel forward, only occurs in water.

Fruit flies and other flyers also use drag to "swim" through the air, the scientists say. Their discovery lends support to the evolutionary theory that flight in insects emerged from swimming.

Flight, as explained in any physics textbook, is made possible by lift forces. Man-made aircraft use lift forces to create thrust. In helicopters, for example, the blades are tilted to redirect the lift force in the forward direction. In jetliners, the turbine blades in the engines use the same principle to generate a propulsive force.

When a fish swims, it uses its back fins to create propulsive lift forces. However, it also uses paddling pectoral fins to create drag to propel forward. This combination of lift and drag are characteristic of evolved swimmers. Insects, it was always thought, rely exclusively on lift and redirected lift to make in-air maneuvers -- such as when a fruit fly dodges a swatter. The Cornell researchers say they also use drag.

Ristroph and collaborators used a 3-D motion capture setup and a computer program that simulates insect flight to compare experimental data with computer simulations for forward flight in insects. By breaking up the experimentally determined wing motions into different components and simulating each component's effect on forward thrust generation, they were able to determine that the most important aspect of the wing motion was the angle with which the wings slice through the air.

By having a small angle of attack during the forward stroke and a large angle of attack during the backward portion of the stroke, the flies created a forward-propulsive force by literally paddling through the air. As the insect speeds up, an additional drag force due to the oncoming air balances the wing-generated thrust and sets the "terminal forward velocity" of the insect.

A key finding of the research is that because both the propulsive force and the force due to the oncoming air arise from drag, the control law for setting the final forward velocity is independent of the properties of the medium -- say the density of air or water. To fly faster, the animal need only adjust the difference in angle of attack between the forward and backward strokes.

That's why these laws should hold up on, say, the surface of Mars, Cohen says. He imagines robotic flyers exploring the planet's surface, for example, whose physics of in-plane maneuvering would be the same as on Earth (though the lift force would need to be substantially different on Mars).

In fact, a company in California called Aerovironment is developing prototypes of hovering robotic flyers that make use of the physics principles demonstrated in Cohen's papers. "This is no longer science fiction," Cohen said. "At the moment these flying robots are large, but imagine a future where they can be made as small as a fly."