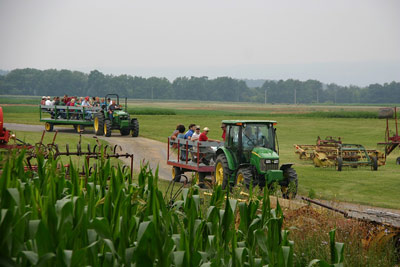 Anja Timm
Field Day tours -- 200 farmers came in 2010 -- connect farmers to research they can put to use in their fields back home. The 2011 Field Day [LINK to http://cornell.localist.com/event/Musgrave_field_day] is July 14.

Paul Stachowski, farm manager at Cornell's Musgrave Research Farm near Aurora, N.Y., pilots his tractor along rows of winter wheat waving in the wind. Beneath them a carpet of red clover blankets the earth.

Stachowski sowed the wheat last fall to give it a head start. But he waited until March to sow roughly 75 million seeds of red clover over this Cornell University Agricultural Experiment Station field.

"Much research on this technique was done at Cornell," Stachowski says. "You don't have to till the soil, since late frosts pull the seed into the ground." The clover roots "fix" nitrogen from the air (i.e., pull nitrogen from the air into the soil, replenishing its nitrogen) and help prevent erosion. Once tilled next spring as a "green manure," the clover provides natural nutrients for the crops that follow.

Learn about the latest research:

• western bean cutworm and other pests of the 2011 season.

Now Stachowski, his crew and a few seasonal staff are preparing dozens of plots on 100 acres for Cornell scientists to use in a wide range of research projects on grains, soybeans and forage crops. These crops -- which account for 90 percent of all crop acreage in New York and whose combined value exceeds $1 billion -- are critical to New York's economy and self-sufficiency.

Although fertile now, these soils were depleted when Cornell purchased the farm in 1949. Cornell's first crop ecology researcher, Professor Robert Musgrave, did much of his seminal research on the farm that now bears his name. 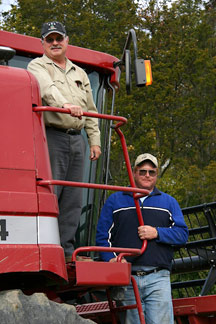 Cornell researchers focus on organic waste streams such as residential yard trimmings and agricultural leftovers like rice and peanut hulls to create carbon-rich biochar. Once turned into the soil, biochar has the potential to lock in carbon while enriching the earth for centuries.

At Musgrave, researchers not only are studying how the biochar process works but also are undertaking an organic cropping systems project to see how different yearly rotations of soybeans, corn and spelt (an ancient wheat variety with a strong organic market) sustain soils and save money. Since corn is a heavy feeder, the team seeds clover into their spelt; once tilled into the soil, nutrients from decaying clover provide an extra nutritional boost for corn.

"We wanted to mimic the needs of a farm with no livestock, a farm that might need to purchase extra manure or compost to nourish the corn," says team member Brian Caldwell. The team found that despite its reputation as a light feeder, the spelt performed better than controls with the boost from the clover -- while corn grown on the soil later was happy either way.

Such projects are only two of about 50 that Stachowski oversees. The Aurora crew also produces several hundred acres of cash crops each year, such as soybeans or corn, to help pay the farm's bills.

Mary Woodsen is a science writer with the Cornell University Agricultural Experiment Station.