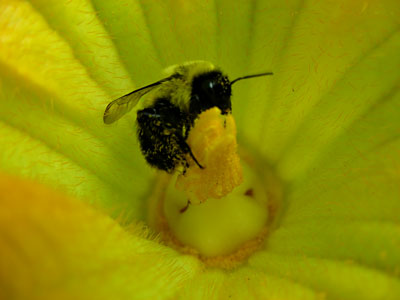 Provided
The common eastern bumblebee (Bombus impatiens) is the most effective native pollinator of pumpkins.

Each grinning jack-o'-lantern starts with yellow pollen grains, ferried from a male to a female pumpkin flower by bees. Honeybee populations are in decline, but Cornell entomologist Brian Nault has identified the eastern bumblebee as the best native pollinator, capable of boosting pumpkin yields and profits for New York growers.

"I was intrigued by honeybee colony collapse disorder and interested in the potential contribution of native bees for picking up the slack in vegetable crops like pumpkin that require pollinators," said Nault, associate professor of entomology. "We found that the common eastern bumblebee (Bombus impatiens) was not only the most effective native pollinator for pumpkins, but that supplementing small pumpkin fields with bumblebee colonies significantly increased the number of pumpkins produced per plant."

Pumpkins are big business in New York state: The 2010 crop was valued at $35 million, the highest in the nation. Nearly half of all vegetable farms in New York, which occupy 6,650 acres, grow pumpkins.

"For many growers, pumpkins are the last crop to be harvested and can make the difference between profit and loss," said Steve Reiners, professor of horticulture and project collaborator. "Only the largest growers are currently supplementing their pumpkin fields with honeybee hives brought in to pollinate other crops, but I think the results of this study will generate interest in bumblebee supplementation among smaller producers as well."

According to Nault, the bumblebee advantage is due to several factors. Compared with squash bees, eastern bumblebees searching for nectar make more visits to fruit-producing female flowers, where they deposit a greater number of pollen grains. They spend more time in the female flowers, and their larger size causes their pollen-laden hairs to graze the crucial spot for pollination: the stigmas.

Bumblebees also pollinate in cool and rainy weather that keeps honeybees hive-bound. However, like honeybees, they live in social colonies, making them amenable to commercialization in "quads," boxes that provide shelter for four colonies and their broods.

Nault is expanding the project with a $100,000 grant from the New York State Department of Agriculture and Markets. This experiment will put bumblebees in a head-to-head challenge with honeybees for the designation of best pumpkin pollinator.

"We hope to learn whether or not pumpkin producers in the Finger Lakes need to invest money and resources into renting, purchasing or maintaining bees to maximize yield," said Jessica Petersen, the postdoctoral associate coordinating the study.

Based on the results, the team will develop a decision-making guide vegetable growers can use to determine if their fields should be supplemented with commercial bees or if native populations are sufficient to pollinate the crop.

They will also examine how landscape features, such as woods that can provide nesting sites, affect the abundance of the eastern common bumblebee. Molecular genetics will allow them to estimate the number of nests close to fields based on DNA fingerprinting.

"Pumpkins are a model crop for the cucurbit family, which includes cucumbers as well as summer and winter squashes," said Nault. "We are interested in eventually extending the findings to these other crops, as well as learning more about native bees, their ecology and how they interact with vegetable crops in New York."