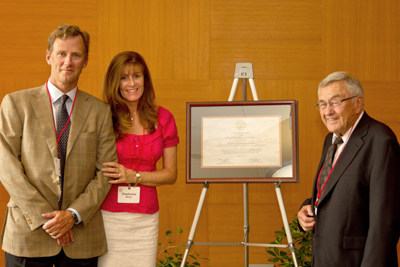 Peter Nolan '80, MBA '82, and Stephanie Nolan '84 have endowed the David J. Nolan Directorship of the Charles H. Dyson School of Applied Economics and Management in honor of Peter's father. Their gift is intended to ensure support for the Dyson School's leading academic and administrative leader and to build on the momentum created by the recent naming of the Dyson School.

Loren Tauer, an expert in productivity and efficiency analysis who became the Dyson School's administrative leader in 2008, has been named the first David J. Nolan Director.

"The Dyson School ... has emerged as one of the truly premier undergraduate business programs in higher education," said Peter Nolan. "We are honored to support the directorship of Loren Tauer as he continues to lead one of Cornell's most nationally venerated programs."

"This new endowed directorship, made possible by the generosity of Peter and Stephanie, will help ensure that the Dyson School continues to expand its enormous potential and attract students of outstanding caliber," said Kathryn J. Boor, the Ronald P. Lynch Dean of Agriculture and Life Sciences. "Given the college's and Dyson School's emphasis on leadership development, it is highly fitting that Peter's and Stephanie's investment in the Dyson School will serve as a lasting legacy of David Nolan's leadership."

David Nolan '49, M.S. '51, a graduate of the Dyson School, then known as the Department of Agricultural Economics, is an accomplished agricultural and business leader in New York state. He helped with the start-up of Telemark, an Agway subsidiary, was state director of the Farmers Home Administration and served as chairman, president and CEO of the Central National Bank of Canajoharie. He has led the College of Agriculture and Life Sciences (CALS) Planned Giving Committee, served as a member of the CALS Advisory Council and the Cornell University Council, and, with his late wife Martha Nolan, created an endowed scholarship at Cornell. His four children, including Peter, are all graduates of CALS.

Peter Nolan is managing partner of Leonard Green and Partners, L.P., and has been serving as a Cornell trustee since 2004. The Nolans have also endowed scholarships to support Cornell's need-blind admission policy and to provide opportunities for graduate business education at Cornell's Samuel C. Johnson Graduate School of Management.

Janelle Tauer is communications director for the Dyson School.