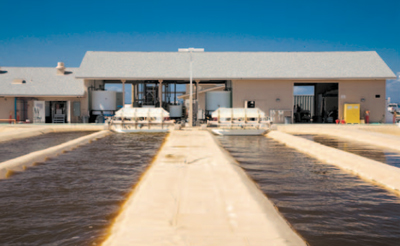 Cellana
A bioreactor with an open pond like this one, which uses photosynthesis to make fuels, could be improved with the use of optofluidic technologies.

The ability to manipulate light and fluids on a single chip, broadly called "optofluidics," has led to such technologies as liquid-crystal displays and liquid-filled optical fibers for fast data transfer. Optofluidics is now also on the cusp of improving such green technologies as solar-powered bioreactors, say Cornell researchers.

The biggest challenge, says Cornell's David Erickson, associate professor of mechanical and aerospace engineering, is how to upscale optofluidic chips, which are built at nanometer scales, to deliver enough energy to make a difference. These challenges and opportunities are detailed in a Nature Photonics Review article by Erickson and two colleagues, published online Sept. 11.

"Over the last five years or so, we have developed many new technologies to precisely deliver light and fluids and biology to the same place at the same time," Erickson said. "It's these new tools that we want to apply to the area of energy."

For example, photobioreactors are large-scale systems that use microorganisms such as algae or cyanobacteria, to convert light and carbon dioxide into hydrocarbon fuels. Photobioreactors employ photosynthesis for energy conversion, and Erickson envisions using an optofluidic chip to optimize how light and chemicals are distributed in the reactor.

In such systems as open-air ponds that harvest algae and collect sunlight, the light is scattered haphazardly, and the top layer gets more exposure. Optofluidic technologies, such as plasmonic nanoparticles or photonic waveguides, could more directly target the microorganisms and lead to greater energy output.

Similarly, the paper also describes how optofluidic devices could be used to improve photocatalytic systems, in which light energy splits water into the components hydrogen and oxygen, or converts carbon dioxide and water into hydrocarbon fuels. Other applications include optofluidic chips in solar collectors.

Erickson authored the review with Demetri Psaltis of Ecole Polytechnique Federal Lausanne, Switzerland, and David Sinton of the University of Toronto. His research is supported by the Academic Venture Fund of Cornell's Atkinson Center for a Sustainable Future and the National Science Foundation. Erickson is also a member of the Kavli Institute at Cornell for Nanoscale Science.