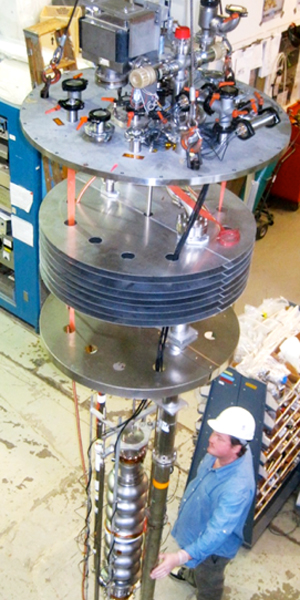 For more than a decade, Cornell scientists have been conducting research and development for an Energy Recovery Linac (ERL) electron accelerator that would produce X-ray beams 1,000 times brighter than any in existence.

The National Science Foundation provided $50 million for 2006-14 to build instrumentation for prototyping and testing ERL concepts proposed by the Cornell team of faculty, students and collaborators. Specifically, the program goals are to prove that electron beams of unmatched quality could be created and accelerated to continuously produce X-ray beams with the laserlike property of coherence. No such X-ray source presently exists.

Cornell's ERL team is now reporting that its prototype electron injector is producing beams with a so-called emittance of 0.8 micrometers -- the smallest ever recorded from an electron source of this type. The injector is the key component needed to make an ERL work by creating electron beams that are tightly packed and traveling at nearly the speed of light. The emittance is a measure of how tightly packed the electron beams are.

This small emittance, say the scientists, proves that the ERL could produce X-ray beams focused down to exceedingly small volumes, allowing investigation of materials with unprecedented precision and speed.

In another breakthrough for the ERL project, the scientists have built and tested a prototype seven-cell superconducting radio frequency (SRF) cavity. SRF cavities are needed to accelerate the electrons from the injector to very high energies in order to produce the X-rays. The SRF cavities are operated at -456 F (-271 C), just 2 degrees above absolute zero temperature.

The Cornell researchers' SRF cavity has met the first performance specifications necessary to continuously power a high intensity ERL. It has been tested in a vertical cryostat at the required temperature and electric field gradients -- a significant milestone because it proves the cavities can perform at high power while within the scientific and cost parameters of the project.

The team must now demonstrate the efficacy of their cavities in horizontal tests, which will take place in 2012.

"These developments go a long way toward proving that an ERL X-ray source will work as predicted by simulations and theory," said Sol Gruner, director of CHESS.