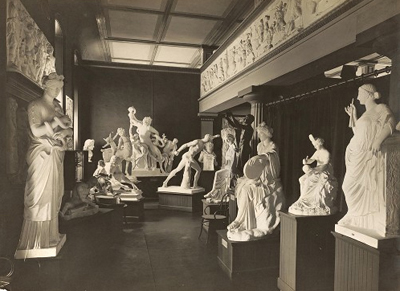 Courtesy of the Division of Rare and Manuscript Collections, Cornell University Library
The plaster cast collection in The Museum of Casts, McGraw Hall, as it appeared between 1891 and 1906.

Cornell University Library and the College of Arts and Sciences have awarded six new grants to create new digital content of enduring value. Treasures ranging from Bronx-born hip-hop posters to ancient Greek and Roman coins will hit the Web in the near future as part of the Grants Program for Digital Collections.

The 2011 projects and faculty leads include:

• Annetta Alexandridis, assistant professor of art history: to make 1,500 images of Greek and Roman coins available online, along with detailed descriptions that will enable the integration of these coins in teaching and learning.

• David Bathrick, the Jacob Gould Schurman Professor of Theater, Film and Dance and professor emeritus of German studies: to expand the existing Müller-Kluge online collection. The website will feature interviews between German filmmaker and author Alexander Kluge and other notable German authors, philosophers and playwrights.

• Tim Murray, director of the Society for the Humanities and professor of comparative literature and English: to digitize and preserve the Experimental Television Center video collection.

The program was developed by the Arts and Sciences Visual Resources Advisory Group, co-chaired by Sturt Manning, professor of classics, and Oya Rieger, associate university librarian for digital scholarship services. The group oversees the grants program and determines arts and sciences faculty needs for a usable and sustainable visual resources digitization service.

This is the second round of annual grants; 2010 awards included digitization of Nepali texts and Cornell's extensive plaster cast collection, among other projects.

"These grants are a way of unlocking our resources -- some of which are so valuable and fragile that they can't even be handled physically," Rieger said. "Because they're online, these materials can now be used not only within the Cornell community, but by scholars all over the world in support of teaching and research."

For information on the 2012 grants program, contact dcaps@cornell.edu. Proposals are due in March 2012; awards will be announced in May.