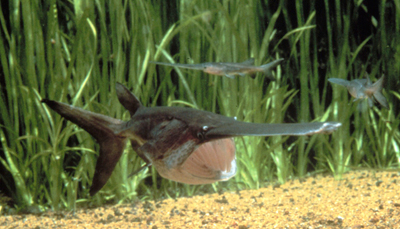 Although humans experience the world through five senses, sharks, paddlefishes and certain other aquatic vertebrates have another sense: They can detect weak electrical fields in the water and use this information to detect prey, communicate and orient themselves.

Now, a study in the Oct. 11 issue of Nature Communications that caps more than 25 years of work finds that the vast majority of vertebrates -- some 30,000 species of land animals (including humans) and a roughly equal number of ray-finned fishes -- descended from a common ancestor that had a well-developed electroreceptive system.

This ancestor was probably a predatory marine fish with good eyesight, jaws and teeth and a lateral line system for detecting water movements, visible as a stripe along the flank of most fishes. It lived around 500 million years ago. The vast majority of the approximately 65,000 living vertebrate species are its descendants. 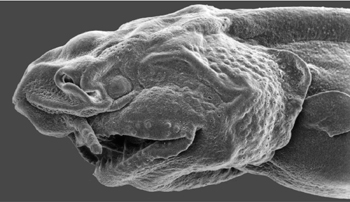 Willy Bemis
A scanning electron micrograph of the head of developing paddlefish shows pores of the lateral line and electroreceptive organs.

"This study caps questions in developmental and evolutionary biology, popularly called 'evo-devo,' that I've been interested in for 25 years," said Willy Bemis, Cornell professor of ecology and evolutionary biology and a senior author of the paper. Melinda Modrell, a neuroscientist at the University of Cambridge who did the molecular analysis, is the paper's lead author.

"The crucial pieces came from techniques of developmental and molecular biology. Such a synthesis of modern techniques, classical questions and basic anatomy is the cornerstone of 'evo-devo' research, and it promises to help us better understand the origin and evolution of many organ systems, including the brain," Bemis added.

Hundreds of millions of years ago, there was a major split in the evolutionary tree of vertebrates. One lineage led to the ray-finned fishes, or actinopterygians, and the other to lobe-finned fishes, or sarcopterygians; the latter gave rise to land vertebrates, Bemis explained. Some land vertebrates, including such salamanders as the Mexican axolotl, have electroreception and, until now, offered the best-studied model for early development of this sensory system. As part of changes related to terrestrial life, the lineage leading to reptiles, birds and mammals lost electrosense as well as the lateral line.

Some ray-finned fishes -- including paddlefishes and sturgeons -- retained these receptors in the skin of their heads. With as many as 70,000 electroreceptors in its paddle-shaped snout and skin of the head, the North American paddlefish has the most extensive electrosensory array of any living animal, Bemis said.

Until now, it was unclear whether these organs in different groups were evolutionarily and developmentally the same.

Using the Mexican axolotl as a model to represent the evolutionary lineage leading to land animals, and paddlefish as a model for the branch leading to ray-finned fishes, the researchers found that electrosensors develop in precisely the same pattern from the same embryonic tissue in the developing skin, confirming that this is an ancient sensory system.

Researchers can now build a picture of what the common ancestor of these two lineages looked like and better link the sensory worlds of living and fossil animals, Bemis said.

Co-authors include Glenn Northcutt, a world expert on vertebrate neuroanatomy based at the Scripps Institution of Oceanography; and Claire Baker at the University of Cambridge, whose lab contributed molecular analyses.

The study was funded by the Biotechnology and Biological Sciences Research Council in the United Kingdom, National Institutes of Health, National Science Foundation, Whitehall Foundation and Tontogany Creek Fund.