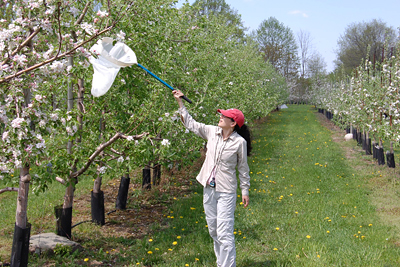 The honeybee has hogged the pollination spotlight for centuries, but native bees are now getting their fair share of buzz: They are two to three times better pollinators than honeybees, are more plentiful than previously thought and not as prone to the headline-catching colony collapse disorder that has decimated honeybee populations, says Cornell entomology professor Bryan Danforth.

He is one of a dozen researchers across the Northeast involved in a five-year, $3.3 million project to study whether the pathogens, viruses and fungi that are harming the honeybee also affect native bee species. The grant, led by Anne Averill of the University of Massachusetts-Amherst, will also investigate how native bee abundance and diversity are influenced by the size, pesticide use, landscape and crop diversity on farms.

Danforth is also the lead researcher on a four-year, $450,000 grant from the U.S. Department of Agriculture's Agriculture and Food Research Initiative that will fund research on native bee species abundance in New York state apple orchards.

His findings so far are "very good news" for New York apple farmers, who contribute nearly $261 million per year to the state economy. Along with graduate student Mia Park and postdoctoral researcher Eleanor Blitzer, Danforth discovered that native bees are actually more effective pollinators than the honeybee -- "two to three times better," he said.

They are also more plentiful than once thought. In 25 surveyed orchards near Ithaca and Lake Ontario, Danforth and his team expected to find 40-50 native bee species, and they found almost 100.

Honeybees are considered valuable because, unlike most native species, they can be moved from farm to farm. For example, honeybees are critical in pollinating California almond fields in February when there are no native bees around, Danforth said.

However, the mobility of the honeybee has exposed it to a wide variety of pathogens and stresses, which likely contribute to colony collapse disorder, he said.

There are more than 20,000 bee species in the world, including roughly 450 in New York state, Danforth said. The species in New York can help pick up the slack of the declining honeybee, which is not native to North America. In fact, native bees may have been doing a lot of pollinating work all along but not getting credit for it, Danforth said.

"In the past, the attitude has always been, 'Well, you have the crop, and you have the honeybee, and that's all you really need.' But nobody has ever bothered to ask, well what about all these other bees that are out there?" Danforth said. "The role of native bees in crop pollination has been largely unappreciated -- until colony collapse disorder created a crisis."