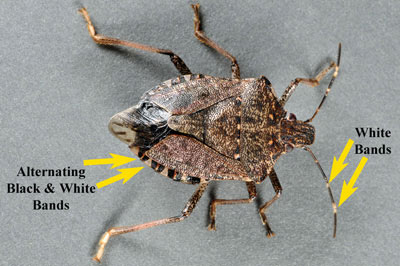 Provided
This brown marmorated stink bug specimen shows the typical marbled pattern on its back, which is what "marmorated" means. The bug measures 1/2 to 5/8 inches long.

A new hobo pest -- the brown marmorated stink bug (BMSB) -- is pigging out on many of North America's most important crops, posing an unprecedented threat to U.S. agriculture, say experts.

"There's been nothing like this in several decades," says Peter Jentsch, a researcher at Cornell's Hudson Valley Laboratory and one of 10 Cornell scientists and 70 others, including some as far afield as Oregon and Florida, looking for ways the curb the pest, which caused catastrophic damage in 2010.

Cornell's Northeastern Integrated Pest Management (IPM) Center will lead national outreach and education, while Art Agnello '74, professor of entomology at the New York State Agricultural Experiment Station in Geneva, N.Y., will study the impact of BMSB as it colonizes new habitats. Their work is funded by $450,000 over three years from the U.S. Department of Agriculture (USDA), which has awarded $5 million for this project to 13 institutions across 10 states.

A native of Asia, BMSB touched down in Allentown, Pa., circa 1996, quickly becoming a nuisance pest. By 2004 it was showing up on farms and forests. By 2010, it had destroyed some growers' crops in five Mid-Atlantic states. BMSB has a huge host range, including field crops and ornamentals.

The insect was first confirmed in the Hudson Valley in 2008. "New York is a frontier state for BMSB," says Agnello. "People are primed to get panicky if this pest shows up in their crops."

Agnello's team is looking at the time lag and impact of BMSB as it colonizes new habitats, how to distinguish and diagnose signs of injury in different crops, and which plant pathogens are likely to find entry at feeding sites.

The value of susceptible crops in the 33 states where BMSB has been established or sighted exceeds $21 billion. In 2010, it cost apple growers alone $37 million, says Tracy Leskey, USDA entomologist and director of the multistate project, funded by the USDA's Specialty Crop Research Initiative. In New York, which is a top-five producer in apples, grapes, pears, tart cherries, snap beans, sweet corn, cucumbers and summer squash, these crops are worth a combined $878 million to growers.

Yet 2011 losses haven't been as severe. Conventional growers are spraying aggressively, and July's record heat and drought probably played a role, say scientists involved in the project. Yet BMSB is devastating corn in some places, and once the rains returned, Jenstch and his colleagues found high numbers of BMSB in Hudson Valley woodlots and forests -- but none in orchards they bordered.

"I think they got the moisture they needed from leaves of woodland trees and were content to stay," Jentsch says.

These stink bugs, some say, smell like a combination of cilantro and burnt rubber. But not all stink bugs are pests, and some are beneficial, preying on common garden pests. Because "broad-spectrum" sprays kill beneficials as well as pests, says Jentsch, "we need to keep our hands on the reins and off the trigger."

Organic growers have few options, but researchers hope to find the right BMSB pheromones -- "scents" that lure BMSB into traps -- or discover which "natural predators" will safely keep BMSB in check. Such science-based IPM tactics keep environmental and economic costs as low as possible.

"The best hope for all growers, organic or conventional, is developing these classic IPM tools," Agnello says.

New Yorkers can help the Citizen Science BMSB project by sending iPhone images, which have embedded GPS locations, of the brown marmorated stink bug to track the spread of this new insect. Images can be emailed to pjj5@cornell.edu.

Mary Woodsen is a science writer with the Northeastern IPM Center.