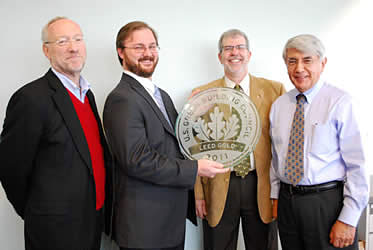 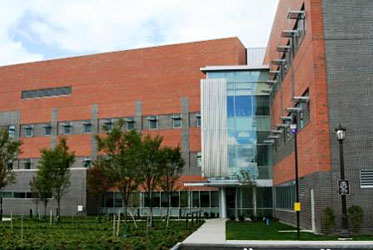 The New York State Veterinary Diagnostic Laboratory, which opened a year ago and houses the Animal Health Diagnostic Center, has recently been awarded a "gold" certification by the Leadership in Energy and Environmental Design (LEED) Green Building Rating System, as judged by the U.S. Green Building Council.

"In addition to being able to work in an efficient, well-planned and naturally lit environment, we have the pleasure of knowing that we're being a good neighbor, contributing to the university's overall commitment to reducing its environmental impact," said Bruce Akey, assistant dean for diagnostic operations.

The gold designation recognizes efforts to control erosion and sedimentation; provide access to alternative transportation, including storage and changing rooms for bicyclists; and offer preferred parking for those driving low-emitting/fuel-efficient vehicles. In addition, superior indoor environmental quality options were installed; a storm water management plan and Green Building educational program have been developed; special roofing material was used to reflect heat, making the building's temperature easier to regulate; and automatic lighting controls have been installed to turn off nonessential interior lighting during nonbusiness hours, and exterior lighting conforms to efficiency standards.

Credits were also earned for efforts that:

Ground was broken in May 2008 for the $70 million, 125,000-square-foot, facility built with a $50 million state allocation through the Empire State Development Corp., along with $20 million from Cornell and other sources. The New York State Veterinary Diagnostic Laboratory is part of a partnership with the New York State Department of Agriculture and Markets; its Animal Health Diagnostic Center is the only full-service multidisciplinary animal disease diagnostic facility in the Northeast. Each year, the facility receives more than 300,000 samples and conducts more than 1 million tests.