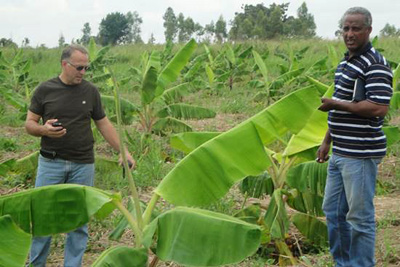 Pests and diseases that attack the Matoke banana, one of Uganda's primary food staples, is the focus of a $7.07 million grant awarded to Cornell by the U.S. Agency for International Development (USAID).

The grant, which is managed by the Agricultural Biotechnology Research Project (ABSPII) in Cornell's Office of International Programs, will run through October 2016.

"The project will allow us to focus on developing the resistance of the East African Highland banana, locally known as matoke, to pests like nematodes and major diseases like Black Sigatoka, fusarium and bacterial wilt," said Frank Shotkoski, Cornell ABSPII director.

The Cornell-led ABSPII program has been working with Uganda's National Agricultural Research Organization (NARO) to improve Uganda's ability to conduct agricultural biotechnology research and develop disease-resistant varieties of matoke since 2005, when Ugandan President Yoweri Museveni launched an initiative to research, develop and add value to the local banana industry.

"This project increases national capacity in plant breeding and builds on NARO's successful collaboration with USAID and Cornell," said Wilberforce Tushemereirwe, team leader, National Banana Research Programme. "Matoke is a primary staple crop for Uganda and a top priority for NARO. Along with improving varieties of rice and cassava, improving banana is central to food security and income generation in Uganda."

East African Highland bananas feed more than 65 percent of the population in Uganda and are a major source of cash for most farmers. High in potassium and dietary fiber and lower in sugar than desert bananas, they are usually eaten cooked.

Cornell and Ugandan scientists are working to reverse the drastic drop in production of matoke in the traditional banana growing areas of central and southwestern Uganda as a result of diseases and pests.

Most matoke varieties are sterile and produce no seeds. Hence, genetic improvement using traditional cross-pollination techniques is a prolonged and difficult process. Using the tools of agricultural biotechnology, banana varieties can be improved without changing other important traits.

"As a result of USAID/Uganda's sustained and comprehensive support of Uganda's agricultural biotechnology development, Uganda is now the region's most advanced in terms of agricultural biotechnology research, technology transfer and product testing," said Tilahun Zeweldu, ABSPII's East Africa country coordinator. He added that the transgenic crops currently being field tested in Uganda include banana, cassava, corn and cotton.

Andrea M. Besley is a communication and outreach coordinator in International Programs.