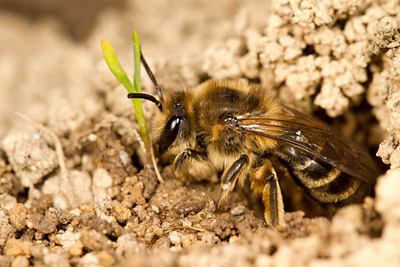 Alberto Lopez
A female cellophane bee (Colletes inaequalis) emerges from her burrow in the early spring in Ithaca, NY.

As the warm temperatures of spring start a little earlier each year due to climate change, bees and plants are keeping pace, according to a new study published online Dec. 5 in the Proceedings of the National Academy of Sciences.

An analysis of bee collection data over the past 130 years shows that spring arrives about 10 days earlier than in the 1880s, and bees and flowering plants have kept pace by arriving earlier in lock-step. The study also found that most of this shift has occurred since 1970, when the change in mean annual temperature has increased most rapidly.

The researchers compared flowering data from 106 native, bee-pollinated plant species over the last 130 years with collection data obtained for bees over the same time period. Data on bee activity was obtained from museum specimens from 10 major U.S. bee collections. A large proportion of the bee data came from the Cornell Insect Collection.

"It's an illustration of how valuable our natural history collections are at Cornell, even if you don't know in advance how these collections might be used," said Bryan Danforth, Cornell professor of entomology and a co-author of the paper. Danforth is also co-principal investigator of a project funded by the National Science Foundation (NSF) to create a database of the 10 bee collections used in this study. Lead author Ignasi Bartomeus and senior author Rachael Winfree are both entomologists at Rutgers University.

"What's amazing is that we can detect these shifting patterns of emergence phenology [timing of when a species emerges after winter] in data like this," Danforth added.

That's because each museum specimen includes such information as the collection date, host plant, precise location, habitat and collector's name. Most of the bees were collected as they hover over or sit on host plants. The study focused on 10 northeastern North American species -- including Mason bees, cellophane bees, digger bees and bumblebees -- that overwinter in a dormant state as adult bees and emerge in the early spring in step with the native plants they pollinate.

Studies like this are important because many ecological functions result from interactions between species, and rapid climate change has the potential to disrupt such carefully timed ecological functions as plant pollination by insects, according to the paper. Bees are key pollinators for some 80 percent of flowering plants and 70 percent of food crops that require insects for pollination.

"Some people may read this study, and say, oh great, we don't have to worry about climate change disrupting plant-pollinator interactions," but more research is needed, said Danforth. For example, the study only examined bee species that overwinter as adults and not species that overwinter as larvae and require more lag time before they emerge as adults. Also, findings might be different in other regions, such as the dry Southwest, where seasonal rainfall plays a role in these dynamics.

Although the triggers for bee spring emergence are unknown, bees may simply be cued to emerge when temperatures rise above a threshold over a number of days, Danforth said.

But "if climate change accelerates the way it is expected to, we don't know if bees will continue to keep up," he added.

Co-authors include researchers from the American Museum of Natural History, University of Connecticut, and York University in Canada. Jason Gibbs, a Cornell postdoctoral associate, conducted and supervised a team of undergraduates entering bee data at Cornell.

The study was funded by the NSF and others.