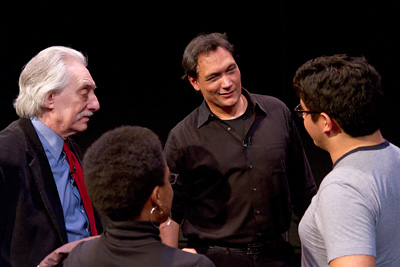 Jimmy Smits, MFA '82, gained some of his "toolkit" as an actor at Cornell, but he credits his sense of civic engagement to his mother.

"That goes back to Mom, instilling it into us -- it's all about giving back," Smits said during a visit to campus Dec. 6 to accept the Cornell Alumni Artist of the Year Award.

During an afternoon question-and-answer session with students and Professor Bruce Levitt in the Schwartz Center's Flexible Theatre, Smits, a Brooklyn native, said he had acted in junior high school plays and "in high school I played sports, but I quit football in order to be in the drama club."

A drama teacher exposed him to New York theater in the 1970s, and later, a professional actor teaching at Brooklyn College "pushed me to do the graduate work and continue my education," Smits said. "He said, 'You could probably go to L.A. and be the crook of the week on a show like "Hill Street Blues"' -- but I'd done a lot of the classics. I did audition for lot of different schools. One of the people I got to meet is sitting here in this audience, Stephen Cole." 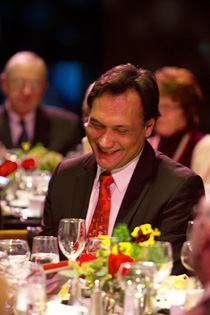 Chris Kitchen Photography
Smits is honored with the Cornell Alumni Artist Award at a dinner.

As a graduate student, Smits considered Cornell "a monastery in the best sense," where he learned a variety of techniques and gained an appreciation for language and researching a role.

"Research reflects the love of detail in everything we do," he said. "You guys were throwing so much at us, from traditional Stanislavsky and Meisner to bioenergetics and voice and diction ... we were a sponge. In summers, we had Hangar Theatre. I was always working on something. I got to do a lot of stuff here, and that really informed the way that I function as an actor and working with an ensemble."

Smits later said one person he would love to work with is a fellow Cornell theater grad.

"You know, Jane Lynch [MFA '84], who's a graduate of this university, she's a tall gal, so I think I wouldn't mind sharing some celluloid with her or being on stage," he said. "She's a very talented actress."

A dinner and award presentation on the main stage at the Schwartz Center featured remarks and anecdotes from Cole, who is now retired; Professor David Feldshuh; Ithaca College professor Greg Bostwick; and Robert Moss, artistic director of Hangar Theatre.

"All of them are principled," Feldshuh said. "Jimmy Smits is a great actor in the public sphere."

Cole recalled directing Smits in the lead of the four-and-a-half-hour "Man and Superman."

"There's probably no other play, no other role, that has that many lines," Cole said. "He had just come off a play in which he had two lines." After Cole cut some of his character's lines, Smits begged him to restore them. "That's when I knew the kind of actor he would be," he said.

Before accepting the award, Smits rose and faced the empty seats in Kiplinger Theatre, held his arms wide and said, "I always wanted to be on this stage!"

"When I was here it was an incredible time," Smits said. "I was very confused about what I was going to do; I was a young parent; but this school set me on a course for life -- it gave me a confidence that really helped me."