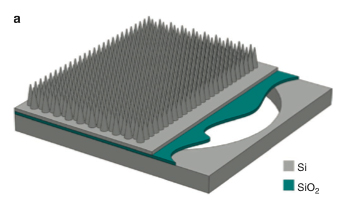 Yuerui Lu
A schematic drawing of the biosensor, which consists of ordered nanowires on top of a silicon-silicon dioxide membrane.

A quick, inexpensive and highly sensitive test that identifies disease markers or other molecules in low-concentration solutions could be the result of a Cornell-developed nanomechanical biosensor, which could potentially help with early stage disease detection.

The biosensor, based on a photonic crystal nanowire array, was developed by Yuerui Lu, a graduate student in the lab of Amit Lal, professor of electrical and computer engineering. Their research was published online Dec. 6 in the journal Nature Communications.

The sensor's operation was confirmed in collaboration with Dan Luo, professor of biological and environmental engineering, and his graduate student Songming Peng.

The experimental device is a mechanical resonator 50 microns in diameter made of a thin silicon-silicon dioxide membrane with ordered, tightly packed vertical nanowires on top. The design achieves a high surface-to-volume ratio for biomolecule detection, which means it can detect molecules at very low -- down to femtomolar -- concentrations. The sensor could be useful, for example, for finding just a few molecules in a glass of water.

The sensor works by attaching single-stranded probe DNA molecules onto the nanowires. When those molecules come into contact with a target single-stranded DNA, the relevant molecules bind together, changing the mass detected by the device. The mass change causes a change in the resonance frequency of the device. 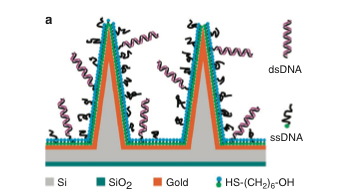 Yuerui Lu
A drawing of how single-stranded DNA is immobilized and hybridized on the sensor.

A laser beam is shined on the device, and the nanowires' innovative design allows for more than 90 percent absorption of the light, resulting in an efficient opto-thermo-mechanical excitation of the resonator. An optical readout of the resonance frequency change can be accomplished remotely, quickly and free of electrical wires, making the device convenient and inexpensive to make, the researchers said.

Lal said he imagines doctors could use such a device in clinical analysis, for example, in DNA testing. Typically today, DNA in drawn blood is compared against a standard sequence.

The new device could instead be coded with particular DNA sequences of relevance, and those specific molecules could be detected in early stages when concentrations are low.

"You could have a cartridge with an array of the membrane sensors, and you could quickly scan to see what DNA imperfection you might have," he said. "Today's tests take time and are expensive."

Such sensors could also be useful for environmental applications, such as water quality monitoring. The researchers hope to improve their device by making it sensitive to certain protein molecules, which are trickier because they do not bind as specifically as DNA molecules do.