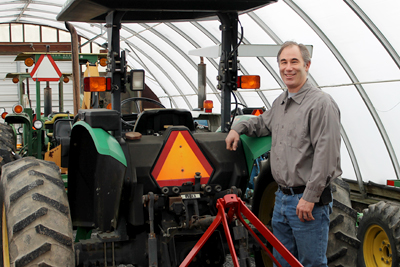 Anja Timm
When winter moves in, Dodge's crew moves out of the fields and turns to maintenance -- lots of maintenance. "We keep busy," Dodge says.

Tim Dodge, who grew up on a dairy farm and worked for seven years as a field assistant at Cornell, felt well prepared for his job as manager of 352-acre Campus Area Farms, operated by Cornell's Agricultural Experiment Station (CUAES). But after four years in the job he's still "amazed," he says, at the complexity at the heart of the plant breeding and soil science research he supports.

"Until I started working here, I had no clue how complicated natural systems were," Dodge says. "I really didn't know what all this took."

Take breeding livestock forages for yield, nutrient quality or pest resistance. Many grasses and legumes have four or more entire sets of chromosomes -- up to eight in some grasses. Yet few traits involve just a single gene, says plant geneticist Don Viands. "Stacking" genes for a range of traits is slow, laborious work. And because these forages grow in tangled mats of plants, scientists can't tell right off which plants are high performers. They must grow and test single plants over and over, each in its own single plot, to get the qualities they want.

"They know every plant out there in the field," Dodge says. "Then they retest the best under field conditions to be sure these new varieties perform well in a crowd."

This level of attention, says CUAES director Mike Hoffmann, is key to the research that builds and maintains all the elements of a sustainable food supply.

"New York is a major player in agriculture in our region and is primed to become more so," Hoffmann says, pointing to a warming climate that, in the near-term, could advantage the New York and other northeastern states.

"These researchers are looking at all the angles," Hoffmann says, "whether it's vegetables and grains with multiple lines of pest resistance to highly productive grass biofuels that could help reduce our dependence on foreign oil."

Cornell was given its first farm near the campus about a century ago -- then another and another. Over time a patchwork of 11 small farms hop-scotched over a four-mile stretch. They bear names like Old Ketola, East Lamkin and Mount Pleasant -- which is why "Campus Area Farms" became the moniker of choice.

This scattershot arrangement wasn't intentional, but it's handy. Onion breeders, Dodge explains, need to keep test plots of different varieties a mile apart. Otherwise they can't certify the seed. Shoehorned into those 11 sites are 12 plots for onion breeder Martha Mutschler. Recently Mutschler discovered how to break down genetic barriers to crossing different onion species and breed resistance to botrytis, a dread onion disease.

"Tim and his crew work nonstop all year," says plant breeder Mike Mazourek, at work on breeding cucumbers resistant to a devastating blight. "Consider that they're preparing a hundred research plots to meet the standards of a dozen-plus researchers and the needs of a dozen different kinds of crops. That takes careful attention to detail. And when the crew isn't in the fields, they're fixing equipment and maintaining lab space."

Dodge loves what he's learned, but most of all he loves his job. "These researchers are real good people," he says. "They're smart, passionate and they're working to make things better for New York and the world. Working with them and getting results -- it's a lot of fun."

Mary Woodsen is a science writer with the Cornell University Agricultural Experiment Station.