Gaeta lab
A laser beam passes through a "split-time lens" - a specially designed waveguide that bumps up the wavelength for a while then suddenly bumps it down. The signal then passes through a filter that slows down the higher-wavelength part of the signal, creating a gap in which the cloaked event takes place. A second filter works in the opposite way from the first, letting the lower wavelength catch up, and a final split-time lens brings the beam back to the original wavelength, leaving no trace of what happened during the gap.

In movie magic, people and objects can appear or disappear or move from place to place in an instant. Just stop the camera, move things around and start it again. Now, Cornell researchers have demonstrated a similar "temporal cloak" -- albeit on a very small scale -- in the transport of information by a beam of light.

The trick is to create a gap in the beam of light, have the hidden event occur as the gap goes by and then stitch the beam back together. Alexander Gaeta, professor of applied and engineering physics, and colleagues report their work in the Jan. 5 issue of the journal Nature.

The beam then passes through another, very long, stretch of optical fiber. Light passing through a transparent material is slowed down just a bit, and how much it is slowed varies with the wavelength. So the lower wavelength pulls ahead of the higher, leaving a gap, like the hare pulling ahead of the tortoise. During the gap the experimenters introduced a brief flash of light at a still higher wavelength that would cause a glitch in the beam coming out the other end.

Then the split beam passes through more optical fiber with a different composition, engineered to slow lower wavelengths more than higher. The higher wavelength signal now catches up with the lower, closing the gap. The hare is plodding through mud, but the tortoise is good at that and catches up. Finally, another four-wave mixer brings both parts back to the original wavelength, and the beam emerges with no trace that there ever was a gap, and no evidence of the intruding signal. 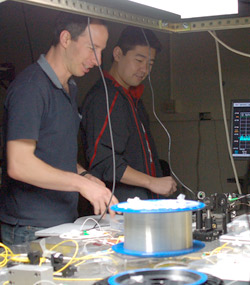 None of this will let you steal the crown jewels without anyone noticing. The gap created in the experiment was 15 picoseconds long, and might be increased up to 10 nanoseconds, Gaeta said. But the technique could have applications in fiber-optic data transmission and data processing, he added. For example, it might allow inserting an emergency signal without interrupting the main data stream, or multitasking operations in a photonic computer, where light beams on a chip replace wires.

The experiment was inspired, Gaeta said, by a theoretical proposal for a space-time cloak or "history editor" published by Martin McCall, professor of physics at Imperial College in London, in the Journal of Optics in November 2010.

"But his method required an optical response from a material that does not exist," Gaeta said. "Now we've done it in one spatial dimension. Extending it to two [that is, hiding a moment in an entire scene] is not out of the realm of possibility. All advances have to start from somewhere."

The research was funded by the Defense Advanced Research Project Agency and by Cornell's Center for Nanoscale Systems, which is supported by the National Science Foundation and the New York State Division of Science, Technology and Innovation (NYSTAR).