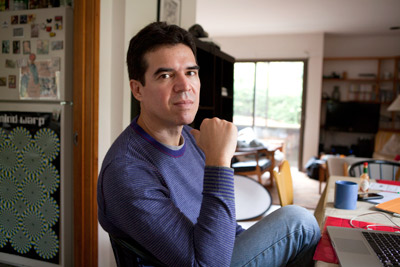 Bolivian writer José Edmundo Paz-Soldán has been recognized across Latin America for the perspective he brings to his fiction. The professor of Hispanic literature in the Department of Romance Studies has been helping other young Latino and Latin American writers at Cornell by facilitating formal and informal venues for them to discuss writing.

"Students knew he was a successful writer, but he has become a kind of magnet for young writers from various parts of Latin America, both graduate students and undergraduates," colleague Debra Castillo says. "A number of people working with him have received national or international prizes."

Paz-Soldán, the author of nine novels and two short story collections, teaches a graduate creative writing course entirely in Spanish, and his other courses have included contemporary Latin American literature and a graduate seminar last semester on apocalyptic writing in Latin America.

"When I came to Cornell 14 years ago, I always wanted to have a space for creative writing in Spanish, or at least a symbolic space," Paz-Soldán says. "Before, Europe was the preferred destination of many Latin American writers." But more than ever are now coming to the United States, he says.

Recognizing the number of talented writers who share similar roots, Paz-Soldán organized a fall conference, "Latin American/Latino Voices for the New Century," with 22 participating authors, including eight from Cornell, ranging from MFA students in English to faculty member Ernesto Quiñonez. The catalyst was a special issue of Granta featuring young writers in Spanish, including graduate student Rodrigo Hasbún.

"Latin American or Latino writers are often separated by language, so we decided to put these writers together," Paz-Soldán says. "It was an incredible success. We are talking with the Latin American Studies Program to do this annually."

Paz-Soldán also hosts biweekly workshops at his home where writers can present their work and talk about writing in a "loose, relaxed atmosphere," he says. "We're on an equal footing. When we started, this was a very advanced group. Two of the five had published work."

His own fiction is part of the McOndo movement in Latin American literature, which explores political issues and the pervasive influence of popular culture. His latest novel, "Norte," is marked by several unsympathetic characters.

"The main character is based on a real serial killer who was an undocumented alien," Paz-Soldán says. "[Interviewers] sometimes will ask you about your moral responsibility as a writer; 'you should create positive, uplifting images of Latinos or Hispanics.' That's not the way I see it. Part of the responsibility to tell the whole story is to show the negative side as well."

He is working on a novel based on the wars in Afghanistan and Iraq, with echoes of Bolivia's history as a mining country.

"I first described it as a science-fiction novel, but very low-budget SF; now I'm describing it as a war novel, [set] in a fictionalized region in the near future," he says. "It's a region full of mines -- there's isolation, alienation, an enemy you don't know anything about."

"Coming from a country where writing was seen more like a luxury or a hobby, I was in a city full of bookstores," he says. "I saw many young people who were writers or wanted to be writers. As a freelancer, I would interview writers. Those years were fundamental for me."

He went to the University of Alabama in Huntsville on a soccer scholarship starting in 1988, but "I tore a ligament my third year," he says. "I play soccer on XBox now."

He decided to devote his life to writing while a graduate student in Hispanic languages and literature at the University of California-Berkeley, where he earned his Ph.D. in 1997 before joining the Cornell faculty.

"I'm grateful to Cornell," he says. "Here, I found a place where I've always been supported in all my projects."