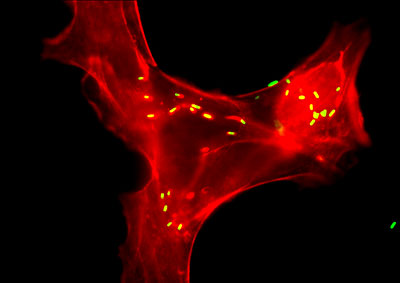 In a year when cantaloupe tainted with the bacterium Listeria monocytogenes killed 30 people, the discovery of a compound that controls this deadly bacteria -- and possibly others -- is great news.

Cornell researchers have identified a compound called fluoro-phenyl-styrene-
sulfonamide (FPSS) that is safe for mammals but stops Listeria in its tracks. It interrupts a mechanism that controls genes that are expressed when the bacterium experiences a rapid change in its environment.

The discovery, reported in the November/December issue of mBio, a journal of the American Society for Microbiology, offers new directions for basic research on how L. monocytogenes and other bacteria survive in a wide range of rapidly changing hostile conditions, from fluctuating temperatures to the low pH levels found in the human stomach. Also, there is a strong possibility that FPSS eventually may be developed as a drug to combat listeriosis and other bacterial infections.

"This is absolutely the most exciting work in my career to date," said Kathryn Boor, Cornell professor of food science, the Ronald P. Lynch Dean of Agriculture and Life Sciences and the paper's senior author. Mary Elizabeth Palmer, Ph.D. '09, a former graduate student in Boor's lab and now at Vitamin Research Products in Carson City, Nev., is the lead author.

For a foodborne pathogen to infect a human, it must be able to survive rapid changes in its environment, ranging from cold of refrigeration and heat from cooking to highly acidic stomach conditions and osmotic and anaerobic states found in the small intestines. To do so, L. monocytogenes and certain other bacteria employ a "stress-responsive alternative sigma factor" called sigma B, which controls more than 150 genes, including those that contribute to virulence and survival in host-associated stress conditions, including genes essential for the bacteria to cross the gastrointestinal tract, according to the study.

"We were the first to characterize sigma B in L. monocytogenes," said Boor. "It's the linchpin in the transition of this organism from a harmless environmental microbe to a human pathogen. It allows these single-celled pathogens to survive environmental assaults associated with transmission in foods, followed by transit in the human body."

Once they identified sigma B, Boor and colleagues looked for compounds that might prevent its function.

By robotically screening 57,000 natural and synthetic small compounds from sets of libraries at the Broad Institute of Harvard and the Massachusetts Institute of Technology, the researchers initially found 41 small compounds that inhibited sigma B. Of those, FSPP was found to be nontoxic to mammalian cells and inhibited sigma B in both L. monocytogenes and Bacillus subtilis (a soil bacteria and food contaminant that survives high heat).

"This is a newly emerging approach in the search for antibiotics that are not dangerous to mammals but stop such pathogens as Listeria, and could be a possible treatment against other organisms," Boor added.

She said that more research is needed to better understand how FSPP controls sigma B activity and whether the compound affects the same mechanism in such pathogens as B. cereus (foodborne illness), Staphylococcus aureus (cause of acne and pneumonia) and Bacillus anthracis (anthrax).