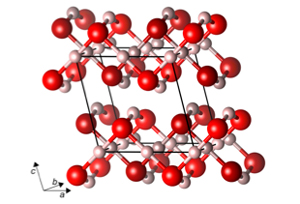 Provided
Static crystal structure of a phase of ice at a pressure of 2 terapascals.

Cornell scientists are boldly going where no water molecule has gone before -- that is, when it comes to pressures found nowhere on Earth.

Exploring what Cornell's Neil Ashcroft calls the "utterly fundamental" transition from insulating to conducting, or metallic, matter, the researchers have combined high-powered computing and "chemical intuition" to discover new phases of water -- specifically, ice at extremely high pressures nonexistent on Earth but probably abundant elsewhere in the solar system.

The research, published online Dec. 29 in Proceedings of the National Academy of Sciences, was conducted by Ashcroft, the Horace White Professor of Physics Emeritus; Roald Hoffmann, the 1981 chemistry Nobel laureate and Frank H.T. Rhodes Professor in Humane Letters Emeritus; and Andreas Hermann, a postdoctoral associate in chemistry and physics.

Combining their interests in condensed matter physics, the discovery of new chemistries and high-pressure studies of water, the researchers predict a sequence of never-before-seen, stable structures of ice in the 1-5 terapascal pressure range. In terrestrial terms, pressure is expressed in atmospheres (we live under one atmosphere of pressure). A terapascal (TPa) is 10 million atmospheres.

"This pressure is way above anything that can be done in the laboratory," Hoffmann said. "It certainly can't be found in Ithaca, not even at Lynah Rink during the Harvard game." It is, however, in the range of the pressure regimes on Uranus and Neptune -- planets whose major components include, well, ice. This means that these far-fetched phases of ice might not just be theories -- they are probably what you would find if you could descend toward the core of the outer planets of our solar system, or in the center of extra-solar planets being discovered today.

So what does ice do at these pressure scales? Discrete water molecules disappear; the H2O in the new ices has an extended network of oxygens and hydrogens. Like sardines in a can, the oxygen-hydrogen-oxygen bonds get squeezed together, forming new shapes. The new ices eventually become metals, but not as quickly as others had previously thought. Researchers at other universities (who inspired the Cornell researchers) have described ice phases that became metallic at pressures higher than 1,550 gigapascals (1 gigapascal is 10,000 atmospheres).

The Cornell researchers' calculations predict new phases stable at pressures above 1 TPa, but the most stable new ices will be insulating -- not metallic -- pushing the theoretical transition pressure for metallization of ice beyond 4.8 TPa.

Their calculations also point to evidence that, in fact, in those extreme pressure regimes, ice might become squeezed to the point of transforming into a quantum liquid -- a most unusual intimation, they said.

The research was supported by the Department of Energy and the National Science Foundation, and the computational work was done on the TeraGrid network provided by the National Center for Supercomputer Applications and the Cornell NanoScale Facility.