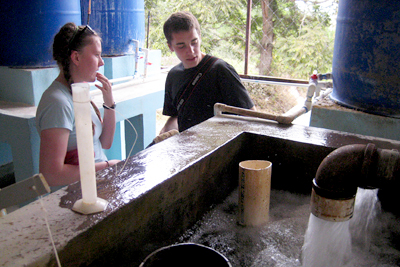 Tamara, HONDURAS -- It was a full-blown fiesta, complete with a mariachi band, platters of food and boisterous children. No westerner who takes clean, drinkable tap water for granted could possibly have guessed the reason for the Jan. 13 party -- the "inauguration" of a water filter designed by Cornell engineering students.

The stacked rapid sand filter, developed by members of Cornell's AguaClara research team, could well be the reason that Tamara, a working-class town of about 3,500, now has some of the best water in all of Honduras. 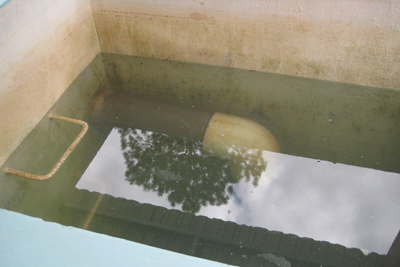 Anne Ju/Cornell Chronicle
The stacked rapid sand filter, an AguaClara innovation, makes Tamara's water some of the best in Honduras.

AguaClara team members, spending two weeks in Honduras, got to celebrate in person. Attending the filter inauguration was a highlight of the team's Jan. 6-20 journey through the country, accompanied by their leader, civil and environmental engineering senior lecturer Monroe Weber-Shirk.

It was the seventh annual AguaClara trip; Weber-Shirk considers it an integral part of the students' work and research. They get to see the brick-and-mortar plants, interact with the engineers and operators who build and run them, and meet the people whose lives have been changed by having clean water for the first time. 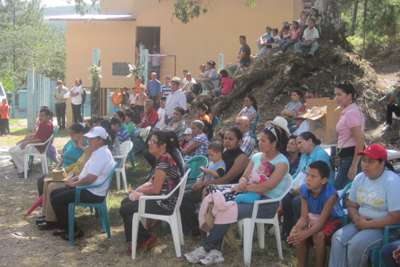 The filter is the latest chapter in Tamara's story of clean water, which began four years ago when the town's local water board laid the first stone of a much-anticipated AguaClara water treatment plant. Tamara is AguaClara's second completed water treatment plant; since then, six more plants have come online. The team designs water treatment technologies in partnership with the Honduran nonprofit organization Agua Para el Pueblo (APP), which supplies technical expertise and education to municipalities about clean water.

The filter is truly like no other, Weber-Shirk said.

Adelman and Will explained that the filter works like filters in the U.S. but with an innovative geometry. It is essentially six mini filters stacked on top of each other, whereas conventional filters typically consist of only one sand bed. The stacking allows for sufficient velocities during backwash, which is a process to clean the contaminants that collect in the filter every day -- without the use of pumps.

Over the years, AguaClara has designed an efficient, sustainable process for treating water without the use of electricity -- ideal for resource-poor communities. Water first enters the plant and is treated with a coagulant that causes impurities to form clumps, called flocs, in a process called flocculation.

After flocculation, the water flows into a sedimentation tank, in which the flocs settle out of the water. The last step, filtration, further purifies the water by passing the water through beds of sand. For AguaClara, putting a filter in at Tamara was a major innovation because filters generally require more infrastructure than towns like Tamara can afford, such as large pumps for generating high flow rates.

The water is so pure that as soon as AguaClara students arrived in Tamara, they began filling their water bottles straight from the tap.