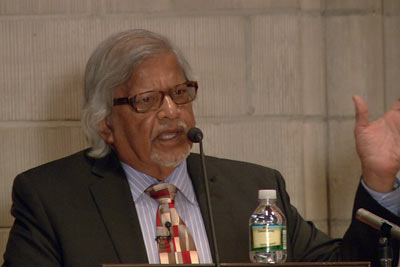 For Arun Gandhi, grandson of Indian independence leader Mohandas Gandhi, his lifelong education in the principles of nonviolence began with a pencil stub.

Gandhi, who delivered the Martin Luther King Jr. Commemorative Lecture Feb. 13 in Sage Chapel, said that when he was throwing out his pencil, his grandfather used the occasion to teach a lesson of nonviolence. 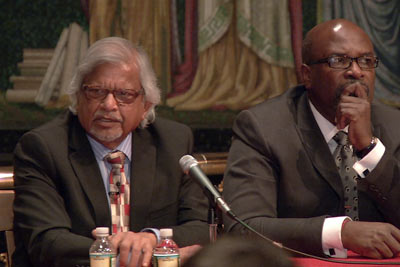 Gandhi, sent to live with his grandfather from the ages of 12 to 14 after encountering anti-Indian prejudice in South Africa, explained how this incident taught him the distinction between passive violence and conventional physical violence.

"Violence governs every aspect of our lives. [There] are hundreds of things we do consciously and unconsciously that increase mistrust and build walls between people; that is passive violence," Gandhi said. "And today we have built so many walls between each other that we have forgotten that behind these walls there are human beings."

A crucial lesson imparted to Gandhi by his grandfather was the necessity to channel anger into positive action. Recalling with humor his many failed attempts to provoke his grandfather to anger, Gandhi reflected, "if we were able to control our anger as he did, we would be able to reduce violence in our lives substantially. We need to learn to manage our anger constructively, and that is the first step in the theory of nonviolence we need to master. ... Unless we change we will never see peace in the world; we must create peace within ourselves."

Committed to social justice and economic-based charity as solutions to the world's problems, Gandhi related his experiences helping "unimaginably poor" textile workers in India save the money required to build their own, 700-machine factory. Rooted in his grandfather's lessons of trusteeship and collective action, this act, noted Gandhi, exemplified "nonviolence at its core, [in helping others] rebuild their self-respect and self-confidence."

Nonviolence is not a political or a protest movement, he argued. Rather, it is a way of living, a philosophy of self-improvement.

"It is because of the culture of violence that we have all these problems of social injustice, why people are living in poverty, in ignorance, or are marginalized and oppressed," Gandhi said. "To practice nonviolence we must bring out all the positive aspects of ourselves in our relationships, and [eventually] the seed of peace will sprout and grow and very soon there will be a whole world of peacemakers."

Among other accomplishments, Gandhi founded the Center for Social Unity, an anti-poverty organization in India, and the University of Rochester-based M.K. Gandhi Institute for Nonviolence.